The CVS in Marina del Rey features six self-checkout stations, which is helpful considering the store usually only has one manned register open. I’m not sure if I’ve ever visited without there being a problem with one of those stations. Fortunately, one staff member’s job is to be on hand to correct what the robots cannot.

It must be strange, training the robot that will soon take your job.

In Pittsburgh, Uber has launched its first fleet of 200 autonomous cars. The results have been problematic. As GeekWire reports:

“We ran over one of Pittsburgh’s infamous potholes just before a yellow light, jarring the steering wheel and causing the car to revert to manual driving mode. Thankfully, each autonomous ride has someone in the driver’s seat, just in case. Our Uber operator took over and slammed the brakes.”

Later during the ride, the car “refused” to be autonomous, a strange turn of events given that that is its singular job. The driver, like the CVS clerk, again took control, this time for the rest of the ride, filling in the gap technology left. Like the CVS clerk, the driver is biding their time, getting paid while there’s still pay left to get.

Which might not be long, if Uber and a large chunk of the transportation industry has its way. Uber, along with Lyft, ZipCar, and a number of smaller companies, including bike-sharing platforms, have signed onto a pledge called “Shared Mobility Principles for Livable Cities.” 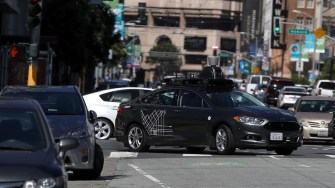 The foundation of this document is commendable enough: innovate transportation for a cleaner, safer urban environment. Given that Los Angeles was just (again) named as having the worst traffic in the world, I should welcome any regulations easing the nightmare I experience whenever I leave my apartment. But there are problems.

While the document professes understandable platitudes like “We prioritize people over vehicles” and “We promote equity,” it’s the tenth declaration that’s troubling: “We support that autonomous vehicles (AVS) in dense urban areas should be operated only in shared fleets.” The statement continues:

“Due to the transformational potential of autonomous vehicle technology, it is critical that all AVs are part of shared fleets, well-regulated, and zero emission. Shared fleets can provide more affordable access to all, maximize public safety and emissions benefits, ensure that maintenance and software upgrades are managed by professionals, and actualize the promise of reductions in vehicles, parking, and congestion, in line with broader policy trends to reduce the use of personal cars in dense urban areas.”

If this pledge, which was created by ZipCar co-founder Robin Chase, were to ever translate into law, that means if you live in a big city, don’t expect to own an autonomous vehicle as that would be illegal. They would be reserved for Uber, Lyft, and, obviously, ZipCar.

The pledge paints quite the utopian picture. Given the problems our transportation model is currently suffering from, including increasing death and injury statistics from distracted driving, something needs to be done. Yet it’s hard to square ideas like access being “possible and affordable by all ages, genders, incomes, and abilities,” and “fairs access fees” across all modes with the fact that this entire document is a ploy to give the roads to a handful of companies already invested in the emerging technology.

Don’t let the liberal language spicing up the document about combating climate change and easing public congestion fool you. There’s a reason the big reveal doesn’t come until the end. How they can claim to “prioritize people over vehicles” while taking away employment from hundreds of thousands of Americans—Uber alone claimed 327,000 US drivers in 2015—is to hope people get caught up in the green verbiage and skim past the bottom.

Omission is not new in this strange new world we’re entering. The sci-fi literature of old often cited the freedom and pleasure that would be derived from technology. How we’d survive financially was always left out of the story. Now that the story is being told we’re realizing that’s because the dreamers never gave it that much thought.

Unfortunately, there are companies putting plenty of thought into the future of tech, and the only pleasure they seek is their own. When Instagram sold to Facebook for a billion dollars it only had thirteen employees. If Uber has its wishes, it’ll have even fewer drivers than that when autonomous vehicles become reality.

Related
Thinking
3 brain games to practice deductive, inductive, and abductive reasoning
Take a closer look at the different types of reasoning you use every day.
The Well
Can we condition ourselves to be heroes?
Neuroscientist Robert Sapolsky on the science of temptation, and the limitations of your brain’s frontal cortex.
▸
6 min
—
with
Robert M Sapolsky
Starts With A Bang
The galaxy cluster that broke modified gravity
19 years ago, the Bullet Cluster provided an empirical proof for dark matter. Even today, modified gravity still can’t explain it.
Neuropsych
Psychology studies that go viral are likelier to be bogus
A new 20-year analysis of over 14,000 psychology studies finds that a study’s media coverage is negatively linked to its replicability.
The Future
How a device transmits radio waves with almost no power
Apart from the energy needed to flip the switch, no other energy is needed to transmit the information.
Up Next
The Present
Why the Olympics have always been a better stage for politics than sport
“Sports is war minus the shooting,” said George Orwell. So far, however, a thawing of tensions between North Korea and South Korea has been the big political story of the 2018 Olympic Games.