If you are one of six or so million state or federal employees in the United States, recent events may be getting you a little worried about your retirement security. The potentially devastating fallout for pensioners in bankrupt Detroit is dominating the airwaves. Here is an excerpt from a New York Times article yesterday:

Vera Proctor, 63, who retired in 2010 after 39 years as a 911 operator and supervisor, said she worried that at her age and with her poor health, it would be difficult to find a new job to make up for any reductions to her pension payments.

“Where’s the nearest street corner where I can sell bottles of water?” Ms. Proctor asked wryly. “That’s what it’s going to come down to. We’re not going to have anything.”

Michael Wells, 65, retired in 2011 after working at the Detroit Public Library for 34 years. He said he still owed close to $100,000 on his house in Detroit, which was appraised recently at $25,000. “I’m totally underwater here,” said Mr. Wells, who is one of the plaintiffs in a union-backed lawsuit to stop the city from filing for bankruptcy and from reducing pension payments.

He said he viewed the pension as part of the overall pay he was promised. “It’s deferred income,” he said. “Had I not had a pension, perhaps I would have gotten several dollars an hour more and that would be O.K. I would have taken that money and invested it in some kind of mutual fund or stock.”

These are nightmarish scenarios for Detroit’s 21,000 pensioners, who stand to lose up to 90 percent of the pensions they were promised and have been expecting. Yesterday, I shared some of my personal pension anxiety in a post at the Economist. But how concerned you are should depend on the state in which you reside. According to this data, 21 states have worrisomely underfunded pension funds while 29 are in pretty good shape.

This map gives you a quick snapshot of the states in particular trouble: 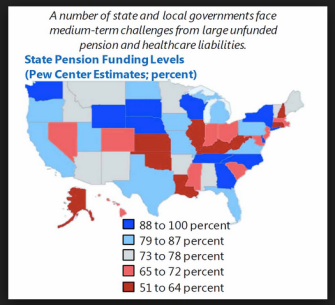 If you’re a public employee living in a melon or red-tinted state, you have strong reason for concern. But don’t feel smug, blue-staters: you’ll notice that Michigan seemed pretty safe when this data was compiled just two years ago. Given the apparently misguided math actuaries have been using to calculate the contributions states must contribute to pension funds in order to fulfill their obligations, it would be dangerous to assume that all is well with public-employee pensions anywhere in America.

Japan just opened to tourists for the first time since the coronavirus pandemic began, echoing the island country’s isolationist policies during the feudal era.
Up Next

Comet ISON Won’t Hit Earth, But a Meteor Shower Might Be in Store

The astronomy video blogger Tony Darnell explains why conspiracy theories about COMET ISON are nonsense, but that a meteor shower might be expected in 2014.