According to the CDC, an estimated 750,000 Americans engage in what is called “medical tourism” by electing to travel abroad for healthcare procedures. CNN‘s Morgan Spurlock upped that estimate to over a million citizens while reporting on the topic last year. Medical tourism shows up often on Facebook feeds, as its fundamental elements are easy to convey in visual form: 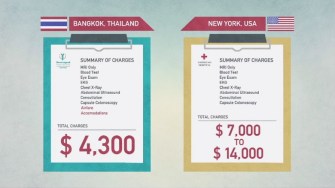 Healthcare in the United States is outrageously expensive. The health insurance industrial complex as a convoluted bureaucracy makes the IRS look like a lemonade stand. Factor everything together and you can see why more people are deciding to have their medical procedures done in accredited hospitals abroad. Heck, if you’ve got to go through an angioplasty, you might as well see some sights and stay in a hotel beforehand.

While some people might think traveling for a procedure is more trouble than it’s worth, the benefits outweigh the inconveniences, according to Anum Yoon at finance blog Len Penzo. It’s cheaper, more efficient, and the quality is more comparable than you’d initially expect. Plus, your insurance will sometimes cover it anyway. 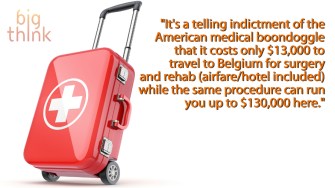 It’s a telling indictment of the American medical boondoggle that it costs only $13,000 to travel to Belgium for surgery and rehab (airfare/hotel included) while the same procedure can run you up to $130,000 here. And with all the hoopla the past five years over Obamacare, it’s easy to forget that it effectively does nothing to try and bring down the cost of healthcare. The Republican opposition, as is their modus operandi, never put forth a reasonable alternative. We’ve more or less argued our voices dry over the ACA for half a decade while the most glaring problem in American healthcare was allowed to fester and grow.

If you’re in need of a major surgery and don’t want to buy into this miserable broken system, take Yoon’s advice and look into medical tourism. I hear Thailand is really nice this time of year.

Below, Brian Mullaney (founder of Smile Train and WonderWork) explains how easy it would be to improve quality of life worldwide with a rethinking of healthcare resource allocation.

Related
Thinking
Visual thinking: How to understand the inner lives of animals
Humans are good visual thinkers, too, but we tend to privilege verbal thinking.
Strange Maps
The world’s longest straight line connects Portugal to China
It’s nearly 20,000 miles long.
The Past
How the death of alchemy gave birth to modern science
Far from practicing witchcraft, the experimentation of medieval alchemists helped bring about the Scientific Revolution.
The Well
This is what the fourth dimension looks like
Left–Right, Back–Forth, Up–Down. What’s the fourth dimension?
▸
3 min
—
with
Brian Greene
The Present
How heat pumps of the 1800s are becoming the technology of the future
Innovative thinking has done away with problems that long dogged the electric devices — and both scientists and environmentalists are excited about the possibilities.
Up Next
Personal Growth
In Social Life, We Know Truth through Human Relationships
Objective truth is fine if we want to know the weather conditions, but to live as a human in a human society, a more nuanced approach is needed to knowledge and understanding.