The crash of Asiana Airlines Flight 214 will provide little comfort for the 25 percent or so of people for whom jet travel inspires terror. But it doesn’t take images of fiery fuselages or panicking crash survivors to cloud our judgment about the relative safety of air travel. The fear of flying is remarkably resilient in the face of the facts.

Slate blogger Matthew Yglesias insists that the whiners shut the hell up already and get their Expedia on:

Air travel is fantastically safe. Over the past five years, there’s been exactly one fatal crash of a U.S. airplane. In the 1999-2008 period there was roughly one fatality per 10 billion miles traveled. The death rate for car travel was 72 times higher. Think about what kind of discount you’d want if a gate attendant asked you to swap your flight for one leaving five minutes later that’s only half as safe as the original plane. Then double that risk again. Then again. Then again. Then twice more. That plane’s still safer than driving an equivalent distance.

We hear all the time how safe air travel is relative to pretty much any other form of transportation, walking included, and it is statistically much safer than traversing great distances in a motor vehicle.

Yet the fear of flying persists. Atheists whisper prayers at 35,000 feet when turbulence gets extreme, yet few religious people bow their heads and ask their deity for a safe trip when merging onto I-80. Why?

There are many appeals to rationality that are designed to quell the fear. Darrell Davis provides “seven anxiety-crushing facts” and Paul Abercrombie shares several strategies, including pharmacologic, to ease the terror. MIT professor Dr. Arnold Barnett gives us the big picture:

“A traveler who took one flight a day could, on average, go 31,000 years until succumbing to a fatal crash.”

OK, then, The 31,000 years thing is reassuring. Except the factoid ends with the words “succumbing” and “fatal crash,” implying that air fatalities, for all their improbability, are inevitable. There is no ironclad guarantee that signing up to hurtle your body at 500+ mph several miles above the ground will result in safe passage to your destination.

So let’s try again. Ezra Klein, the wonkiest of them all, posits that this graph should put an end to the fear of flying once and for all: 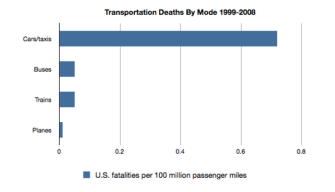 Bar graphs do serve as a balm to the soul, and this one shows clearly how much safer air travel is than various forms of ground transportation. But I’d think that some people considering this graph may develop an unhealthy fear of driving rather than lose their fear of flying, and others might be surprised how much safer it is to board a Greyhound than hunker down in their own Corrollas for a cross-country trip.

The fear of flying is at best weakly responsive to all these rational appeals to the facts because the fear is, fundamentally, irrational. When flight anxiety is joined with the fear of terrorism, individuals behave even more strangely. “It is well documented,” Al Gore writes, that humans are especially fearful of threats that can be easily pictured or imagined”:

As long as human beings are wired to fear the vividly catastrophic, there is little chance of eliminating our fear of flying. It’s interesting, given all this terror, that we are willing to board 10 million flights a year in the United States alone.

“Salvator Mundi” sold for a record-breaking $450 million in 2017, but is it really as valuable as people were led to believe?
Up Next

The Benefits of Cultivating a Psychological Toolbox

Resilience can help your life in a general way to be more productive.