It happens every once in a great while: the ‘Kids’ come down from their lofty peak and tell the elders what they think is “cool.” This time, their outlet of choice was Google by way of a just-released marketing study entitled (wait for it…) “It’s Lit: A guide to what teens think is cool.” There’s a link to the full study is here and it is well worth taking a peek at if — heaven forbid — you’re not trending or on fleek yet.

Apparently kids think YouTube (a Google-owned entity) and Google itself are the coolest things since sliced bread, which disappointingly appears nowhere on the list. 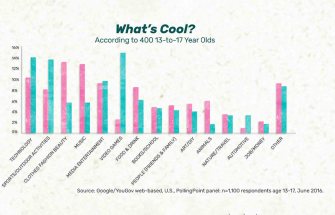 TMZ is one of the most well-known but least cool things, as is People (the magazine, presumably, and not the entire human race) and the sometimes search engine / full-time hacker target Yahoo. Burrito-hawkers Chipotle are cooler than lists-in-large-font paradise Buzzfeed. Hippie-friendly Burt’s Bees is cooler than iconic fashion brand Chanel, but neither are cooler than shoe company Converse. Which have been ‘cool’ for about 60 years. 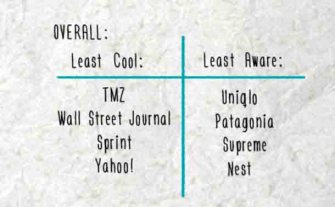 Streetwear label and red-rectangle enthusiasts Supreme takes a big hit in terms of brand credibility, appearing to be one of the brands that teenagers are least aware of. And one of the more hilarious findings in the study is that kids don’t care / don’t even know the über-hip Vice media brand, which appears to be one of the least cool and least visible brands to teenagers. Quite the emperor-has-no-clothes moment for anyone that is old enough to remember Do’s & Don’ts and blog-haüs or indeed the company’sshareholders since the brand’s whole image is built on being perceived as cool.

METHODOLOGY IS COOL, TOO 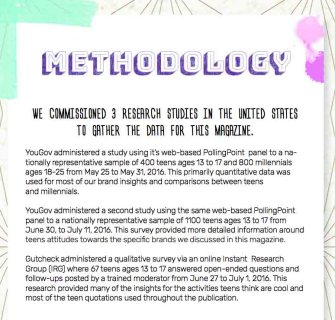 MILLENNIALS? ARE THEY UNCOOL ALREADY?

Related
Hard Science
Some earthquakes last for seconds, others for minutes — and a few for decades
What do you call it when the Earth shakes for three decades?
Sponsored
What childhood “money story” is shaping your financial behaviors?
Here are the signs that you inherited “money anxiety” from your parents.
The Present
The “maritime Indiana Jones” who salvages shipwrecks now wants to tow icebergs
Simple physics makes hauling vast ice chunks thousands of miles fiendishly difficult — but not impossible.
Neuropsych
Inside the brains of aging dogs
In a citizen science project, thousands of pet dogs are helping scientists to understand what happens to memory and cognition in old age.
Neuropsych
The most common source of awe might surprise you
It’s us.
Up Next
Neuropsych
LSD deactivates the brain’s fear center, study finds
A new study finds LSD — a Schedule I drug with “no medical value” — to be therapeutically beneficial.