Hubble was launched on April 24, 1990, about the space shuttle Discovery. Every year since, scientists at NASA, together with the European Space Agency (ESA), release spectacular images from it to recognize its “birthday.”

This year is no exception; these are from the Lagoon Nebula and are stunning examples of what the telescope can “see.”

The Lagoon Nebula is a hub of stars being born, and it’s 55 light-years wide and 20 light-years tall.

NASA and ESA officials wrote an apt message about the nebula being imaged. ”Even though it is about 4,000 light-years away from Earth, it is three times larger in the sky than the full moon. It is even visible to the naked eye in clear, dark skies. Since it is relatively huge on the night sky, Hubble is only able to capture a small fraction of the total nebula.”

For its part, the aging telescope has undergone five repairs and upgrades in space, the last in 2009. It’s expected to last until at least 2020, and likely longer.

The successor to Hubble, the $8.8 billion James Webb Space Telescope, is scheduled to launch in Spring of 2020. 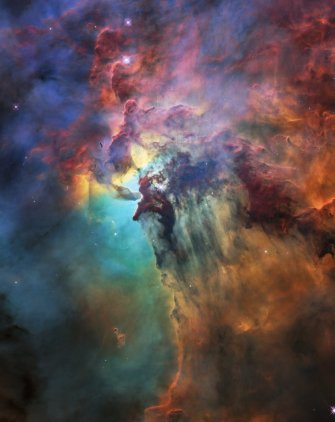 NASA/ESA caption: “To celebrate its 28th anniversary in space the NASA/ESA Hubble Space Telescope took this amazing and colourful image of the Lagoon Nebula. The whole nebula, about 4000 light-years away, is an incredible 55 light-years wide and 20 light-years tall. This image shows only a small part of this turbulent star-formation region, about four light-years across. The observations were taken by Hubble’s Wide Field Camera 3 between 12 February and 18 February 2018. Credit:NASA, ESA, STScI. 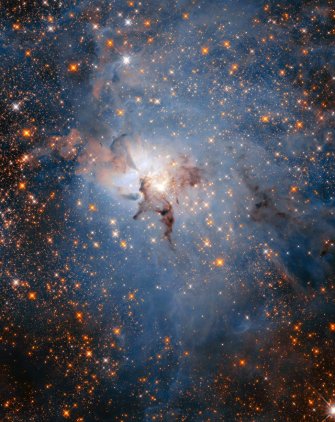 NASA/ESA caption: To celebrate its 28th anniversary in space the NASA/ESA Hubble Space Telescope took this amazing and colourful image of the Lagoon Nebula. Using its infrared capabilities, the telescope was able to peer through the thick clouds of dust and gas. The most obvious difference between Hubble’s infrared and visible images of this region is the abundance of stars that fill the field of view in the infrared. Most of them are more distant, background stars located behind the nebula. However, some of them are young stars within the Lagoon Nebula itself. Credit:NASA, ESA, STScI

The video is also quite captivating; there are more located here.

Related
Starts With A Bang
Ask Ethan: What are white holes, and do they really exist?
In General Relativity, white holes are just as mathematically plausible as black holes. Black holes are real; what about white holes?
Life
Strange life forms create an “alien” ecosystem in an abandoned uranium mine
Slimy biofilms made up of bacterial and eukaryotic life forms have taken over an abandoned, flooded uranium mine in Germany.
Hard Science
Earth has an eerie “sodium glow,” and astronomers use it to image stars
Air currents in our atmosphere limit the resolving power of giant telescopes, but computers and artificial stars can sharpen the blur.
Health
How saliva changes the flavor of food
“It’s a liquid, but it’s not just a liquid.”
High Culture
Why are flood myths so common in stories from ancient cultures around the world?
Could the prevalence of flood myths around the world tell us something about early human migration or even the way our brains work?
Up Next
Strange Maps
Who is the highest-selling artist from your state?
What’s Eminem doing in Missouri? Kanye West in Georgia? And Wiz Khalifa in, of all places, North Dakota?