It may be time to find a job on Facebook.

In a potentially game-changing tweak to the world’s largest social network, Facebook is now allowing employers to post job openings directly to the site in the United States and Canada. While some companies had been using their pages to post openings, Facebook is now making a dedicated spot for those looking for work and those in need of workers to better find each other.

For users, this means that Facebook could become a one-stop-shop that merges their personal and professional lives. This subtle change may have a profound impact on LinkedIn’s future, along with how you typically interact on Facebook. 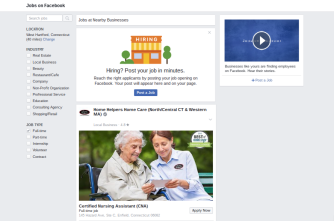 The new feature is called “Jobs on Facebook,” and it takes aim at the underemployed, freelance/independent contractors, and those that might not be actively seeking new employment.  The underemployment rate in the United States is currently 14.1%.

Whereas LinkedIn seems geared to traditional forms of employment with an emphasis on well-honed skills and experience, Jobs on Facebook may target lower-skilled positions and more transactional forms of work. The feature provides a simple “Apply Now” button where applicants will be able to add, edit, and review forms.

Our relationship with using both LinkedIn and Facebook is like a mullet: business up front, party in the back.

LinkedIn for business, Facebook for personal. LinkedIn was where we posted a professional profile photo, gave updates about our career and thoughts on our relative industry, and generally maintained a buttoned-up appearance. Facebook, on the other hand, was where we could let our hair down a little bit and get more personal.

It looks like a game changer to us #JobsOnFacebookhttps://t.co/huRQWnYIvA

When asked why he robbed banks, famed thief Willie Sutton allegedly responded, "because that's where the money is." The concept of obviousness is referred to Sutton's Law. Likewise, we could ask: Why use Facebook for finding a job? Because that's where the companies are. As many commentators have pointed out, Facebook has been tilting more professional while LinkedIn has been tilting more personal. At what point does using both become a redundancy?

Facebook is placing a bet that both prospective hires and employers are desiring a casual method to start an employment conversation. After hitting the Apply Now button, users will find their applications pre-populated with their Facebook data. This information can be edited before submitting the application. Submitted applications arrive in the form of a Facebook message in the employer's inbox.

The feature is free for both jobs posters and those looking for work.

The major question that needs to be answered is whether users are comfortable with the greater erosion between their personal and professional lives. It gets at a fundamental dispute about how we use social networks and the web in general: should we have one unified identity or multiple identities?

If you were the type of person who had a dramatically different "personal brand" on Facebook than you did LinkedIn, Jobs on Facebook may prompt you towards a more refined image. In addition, it removes the question of whether or not a prospective employer will check out on potential worker's Facebook page (although the chosen settings will still impact what is seen).

Is LinkedIn Ripe to be Disrupted?

Facebook's business model from the non-business user standpoint is to increase daily use, and providing a jobs board certainly would prompt additional time scrolling. Facebook may have examined LinkedIn's model, which currently charges both recruiters posting jobs and job seekers wanting premium features, and thought the model was ripe for disruption.

There may be an underlying frustration from LinkedIn users with a cash-rich company charging a substantial monthly fee, less the job seeker be lower on a tiered system. Jobs on Facebook would seemingly be more egalitarian, cheaper, and reduce friction (merged personal brand and simplified application).

Right now LinkedIn is for Work, and Facebook is for Play. But for millions of underemployed Americans, it may be time to apply for a job--after commenting on a friend's vacation photos.

Rock art in northern Australia depicts marsupial lions, giant kangaroos, and other megafauna that populated the Land Down Under long ago.
Up Next
Hard Science

Bill Gates: the Robot Taking Your Job Should Pay Taxes

Bill Gates proposes an ingenious solution to the job losses from the coming automation.