DARPA, the U.S. Department of Defense military research agency, whose work has resulted in staples of modern life such as the Internet and GPS systems, is now working with a San Francisco-based R&D lab – Otherlab – to develop the world’s most advanced industrial paper airplanes.

The project is part of DARPA’s awesome-sounding Vanishing Programmable Resources (VAPR) program. Its aim is to develop electronic systems capable of physically disappearing in a controlled manner. Why? Because (as any Serial fan knows), the military hates leaving any kind of equipment in the field – it may end up in the wrong hands, compromise intellectual property and technological advantage, and also has negative effects on the environment. So, researchers are looking into new materials, components, integration and manufacturing that could together realize this new class of vanishing electronics.

One such project is a cheap cardboard autonomous glider that can be used to deliver supplies to remote areas and then be discarded and biodegraded. The glider has several advantages over other supply drones that are expensive, inaccurate, and need to be recovered or have enough battery capacity for the return trip, which reduces their payload capacity. 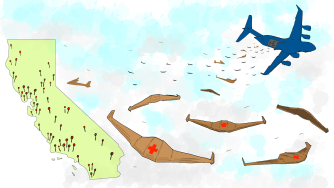 The cardboard glider, on the other hand, is ideal for delivering humanitarian payloads to regions with undeveloped infrastructure.  The glider is motorless, which means it needs to be launched from a moving aircraft or drone but it can then find its precise destination thanks to a small computer on board and sensors that can adjust its wings and rudder. In this way an aircraft may launch hundreds of gliders in one flight, each of them pre-programmed with different destinations. According to Otherlab, a single airplane could conduct delivery operations covering the size of California.

The gliders benefit from being constructed from a low-cost, high-availability material that can ship easily in a flat package and can be assembled by anyone without a technical background. This makes it ideal for doctors in the field who need to ship medical supplies to different remote areas.

Related
13.8
Why the origin of life and the Universe itself might be forever unknowable
There might be a hard limit to our knowledge of the Universe.
Hard Science
200 years of exploring Antarctica
What we’ve learning from the world’s coldest, most forbidding, and most peaceful continent.
Sponsored
4 misleading personal finance tips
Personal finance advice is often over-simplified and fails to consider economic research or people’s unique circumstances.
Strange Maps
Europe’s stunning digital divide, in one map
Some Europeans really don’t want to use the internet.
Thinking
Bonhoeffer’s “theory of stupidity”: We have more to fear from stupid people than evil ones
Evil is easy to identify and fight against; not so with stupidity.
Up Next
Thinking
The Serious Philosophy behind Louis C.K.’s Comedy
The “Philosopher-King” of comedy is Louis C.K. You may know his work, but you might not realize there is some serious philosophy behind some of the best jokes.