Tech fans are in an uproar over Apple’s decision to forgo a standard 3.5 mm headphone jack on their just-announced iPhone 7. Really, it’s all much ado about nothing in practical terms. The Phone 7 will still ship with earbuds — using Apple’s Lightning connector — as well as an adapter into which you can plug your current 3.5 mm pair. (Should you lose the adapter, it’s just $9 to get a new one.) The iPhone 7’s audio system is also Bluetooth-compatible, so you can use any Bluetooth earbuds or headphones you like. You don’t have to buy Apple’s new $159 wireless Airpods. Apple isn’t even the first company to get rid of the jack: That honor goes to Android-phone manufacturers Lenovo (the Moto Z and Moto Z Force), and LeEco.

The switch to the Lightning connector has a downside: It’s proprietary. This narrows the selection of earbuds available for consumers for plug directly into their iPhones without an adapter, and it seems unlikely that manufacturers of audio products will move to Apple’s proprietary standard. For one thing, the Android phones mentioned above send audio out through a completely different type of jack, USB Type-C.

But it also has an upside for audio lovers. It marks a move from the analog domain for earbuds to the digital, where there’s no loss of sound quality before audio gets to the digital-to-analog converters in your ears. This should theoretically mean better sound, and given that it’s all digital, there are interesting signal-processing possibilities for audio manufacturers who do want to make the move.

Apple’s marketing chief Phil Schiller justified the removal of the jack during the phone’s announcement: “The reason to move on: courage. The courage to move on and do something new that betters all of us.” Lots of people find this pretty funny.

The fact is Apple’s been down this road before, often divining what customers wanted before they did. When the first iMacs came out without floppy drives, it was a big deal. Do you even remember floppy drives? Likewise, Apple forced USB connectors down our throats, but prior to USB, we had to shut down our computers just to plug and unplug things. Apple was right.

What Schiller is hinting at is one of Apple’s core beliefs. It’s that the company’s dreamers and engineers have the time/resources/imaginations to look around the corner and see the future in a way that consumers can’t. And it’s that vision, rather than a list of current wants and desires that points the way toward breakthrough products that people will love. 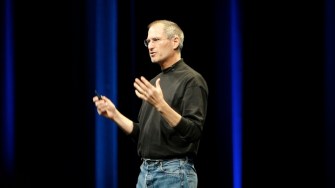 Many people credit Steve Jobs with having been the sole source of the company’s vision, but, brilliant as he clearly was, that was never really so. The basic idea for Macintosh came from Jef Raskin, the iMac came from designer Jonathan Ive’s design group, and Kane Kramer made the first iPod-like music player. Apple’s always been packed with very smart people. Jobs’ genius seems to have been his impatience with complexity, since it continually drove Apple’s team to distill products to their simplest, easiest-to-use form just to satisfy him. Apple’s secret sauce has always been that it wants its products to “just work” without requiring effort on the customer’s part. They don’t always succeed in this, of course, but it’s the reason behind their product ecosystem that others deride as a “walled garden.” Apple sees it as a way to build products that work together seamlessly.

Of course, it requires tremendous internal discipline — Jobs always said one of his best skills was saying “no” — to stay focused on everyone’s needs, and not just come up with something you and your colleagues want. Apple Cube, for example, was more about a fun engineering challenge than something anyone really needed, and it sold poorly. (It wasn’t wasted R&D, though, since that form factor lives on in Apple TV and other products.)

Apple succeeds most when it solves a genuine problem. The genius is in seeing the problem before everyone else does. The iPhone was a smash because people universally hated their previous phones, and here, finally, was a device to enjoy. There were other music players before the iPod, but nothing fun, and getting music was difficult — with the iPod and iTunes, those problems were solved. iMacs were computers that fit in a home. iPads were perfect for couch potatoes, salespeople, and doctors alike.

On the other hand, this is probably the reason that Apple Watch isn’t doing so well. Do people really hate their current watches? Don’t think so. Apple Watch doesn’t solve a problem most people actually have. It’s a solution in search of a problem.

The real reason Apple ditched the jack on the iPhone is real estate. SVP of Hardware Engineering Dan Riccio explained, “We’ve got this 50-year-old connector — just a hole filled with air — and it’s just sitting there taking up space, really valuable space. It was holding us back from a number of things we wanted to put into the iPhone. It was fighting for space with camera technologies and processors and battery life.” Apple also says the jack’s removal aids in the iPhone’s water resistance. Riccio added, “And frankly, when there’s a better, modern solution available, it’s crazy to keep it around.”

Companies that follow their customers’ wishes will always be doing just that: following. Leading the way to the future and “putting a dent in reality,” as Jobs put it, requires vision and — don’t laugh — courage.

How to unlock your brain’s natural antidepressants.
▸
4 min
—
with
Steven Kotler
Up Next
Hard Science

Being able to rewrite DNA as we wish could give us almost god-like power over all life on earth.