It’s long been believed by neuroscientists that a key element in the way memory works is that it utilizes a form of pattern completion. Sometimes the pattern is something like poking in a missing word or two, as in “You don’t know your ___ from your _____.” Sometimes, it’s a pattern of things that, to you, belong together, as in when a single travel photo brings back an avalanche of related travel memories. A smell reminds you of your childhood, etc.

In 1971, David Marr postulated the area of the brain where this occurs is the CA3 area of the hippocampus.

What drew neurosciences’ attention to CA3 is that it’s characterized by neurons that don’t only connect outward, they connect to each other, and those connections allow, in theory, one neuron to excite another. So when the neurons associated with a memory — the beginning of our pattern — fire off, they may also trigger their neighbors that contain related memories and, voilá, the pattern is completed. But this was just a theory, and it required there to be sufficient connections to support all this cross-excitement.

A team of scientists — Segundo Jose Guzman, Alois Schlögl, Michael Frotscher, and Peter Jonas—has just published a study in Science Magazine that examined the number and nature of the connections in a rat’s in-vitro hippocampus to see if CA3 does indeed pack enough connections to behave the way scientists have thought it does. The answers is, no, and also yes, thanks to a surprising twist. Mark Humphries wrote about the study recently in The Spike.

The scientists monitored the activity in individual neurons after attaching tiny glass electrodes to each. They stimulated each to see if caused any other neurons to fire off. After 1,102 tests on various combinations of neurons alone and in groups of up to eight neurons, they found that there were barely any connections at all. What they found was connectivity in less than 1% of the neurons.

The next step was to model a rat’s CA3 area on a computer — with 330,000 virtual neurons — and run a pattern-completion test to see if the small number of connections was enough to account for pattern completion. Nope. Not at all. Hm.

Then they noticed something odd in the connections they had found. Four connection patterns were showing up more frequently than made sense if they were just random occurrences. They were these. 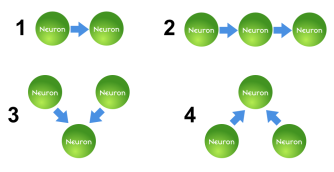 Encountering this head-scratcher, the scientists didn’t know what to make of it, so they returned to their rat-CA3 model, and without adding any new connections, re-wired things a bit so these patterns appeared as frequently as they had in the real rat. They ran pattern-recognition tests again and…yep. There’s something bout these little three-neuron clusters that is allowing pattern completion to happen in the CA3 area of a brain’s hippocampus.

Now they just need to figure out what.

While text-generating AI can be very useful in some applications, it generates pseudo-profound bullshit — that is, content that sounds good to humans but whose truth value is unknown.
Up Next
Neuropsych

How intelligent are psychopaths? Study examines the “Hannibal Lecter myth”

A new study makes a surprising finding on the intelligence of psychopaths, often portrayed as evil geniuses in popular culture.