Whatever you want to call it, a half-zebra, half-donkey hybrid was born last week in a wildlife preserve in Georgia. The offspring of a zebra father and a donkey mother, the “zonkey” looks like a donkey but has characteristic zebra stripes on its legs and face. Prompted by this cute little zonkey, Big Think has put together a list of some of our other favorite hybrid species: 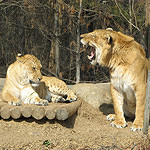 Liger: The liger pounced into the mainstream in the early 2000s thanks to a paper-and-pencil likeness drawn by one Napoleon Dynamite. Produced by a lion and and tigress, the liger is bigger than both of its parents—unlike its smaller cousin the tigron, the offspring of a tiger and a lioness. By far the most famous hybrid of them all (except perhaps the lowly mule), even Charles Darwin took notice: “There are several instances of the female tiger breeding with the lion,” he wrote in “The Variation of Animals and Plants Under Domestication.” And though it does not actually possess any “skills in magic,” the liger is unusually docile despite being the biggest cat in the world.

Cama: A mix between a camel and a llama, the cama doesn’t exist naturally in nature. Because the size difference between the species makes mating physically impossible (camels are roughly 6 times heavier than llamas), camas only came into existence thanks to human intervention. In 1998 a male cama was created through artificial insemination, implanting camel sperm inside a female llama. The cama, named Rama, had “the short ears and long tail of a camel, no hump and llama-like cloven hooves.” Scientist don’t know whether this cama is fertile and hope that it will mate with a female cama that has since been born. 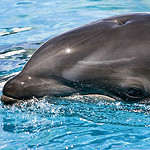 Wholphin: In 1985 a male false killer whale and a female bottlenose dolphin gave birth in captivity to a wholphin named Kekaimalu. The false killer whale is actually a type of dolphin, but it has noticeably different characteristics from a bottlenose dolphin, including half as many teeth and greater size. Unlike many hybrids, Kekaimalu has proven fertile, giving birth to three pups, each 1/4 whale and 3/4 dolphin.

Geep:In 2000, a rare goat-sheep hybrid was born in Botswana. Physically a mixture of its two parents, this unusual hybrid expressed some unique traits shared by neither parent. First of all, it rarely gets sick. The geep’s owner said that when an outbreak of foot rot took hold amongst his other sheep and goat, the geep was resilient despite not being treated. The other salient characteristic is the geep’s unbridled libido: despite being sterile, the male geep would repeatedly mount both goats and sheep even when they were not in heat, earning it the name “Bemya,” or rapist. Eventually, this became such a nuisance that the animal had to be castrated. 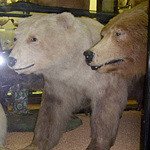 Alternatively known as pizzlies or polizzlies, grolar bears have whitish fur and long claws like a polar bear but are intermediate in size between the two species and have a shallow face and brown patches on their face and back like a grizzly. They exist in captivity as well as in the wild; two have recently been captured by hunters, in 2006 and earlier this year. They are relatively rare, but thanks to the shrinking of summer arctic ice, polar bears will be spending summers in closer proximity to grizzlies. So we should expect more polizzly sightings in the future.

Until James Currier had four sons in 36 months, he was just a regular Silicon Valley entrepreneur. Having sold a start-up called Tickle to Monster in 2004, he took some […]