What’s in a face? Turns out, more than you think.

In 2014, Czech scientist Karel Kleisner conducted a study in which participants viewed photographs of 40 male and 40 female subjects and rated their intelligence. Kleisner sought to discover if there was a relationship between perceived and measured intelligence. He also investigated whether there is an intelligent ‘look.’ In other words, are specific facial traits associated with attributed and actual intelligence?

He found answers, and along the way he unearthed a number of fascinating revelations about appearance and intelligence:1.) You Can Tell If A Man Is Intelligent By Looking At His Face (But Not A Woman) 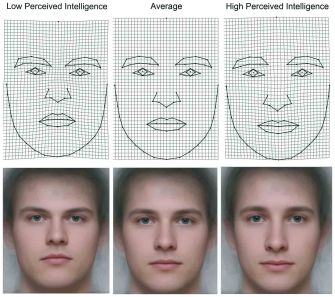 Grids showing differences in facial shape between faces with attributed high intelligence and low intelligence compared to an average configuration in the middle.

Yes, smarter people look more intelligent. But not all people – just men. Kleisner discovered that “both men and women were able to accurately evaluate the intelligence of men by viewing facial photographs.” But strangely, “no relationship between perceived intelligence and IQ was found for women.”

Why would this be? The study suggests that it may be beneficial for men to signal intelligence honestly. Kleisner speculates that such signalling might play well with females’ “mixed mating strategy.” Sometimes explained in terms of women’s alternating preference for so-called ‘cads’ and ‘dads,’ MMS refers to the theory that:

“Women prefer dominant men as extra-pair sexual partners while at the same time they seek men who are more willing to invest in their offspring as long-term or social partners [52]. It is known that while in the fertile phase of cycle and probably in search of good genes, women prefer creative intelligence to wealth especially in short-term mating [18]. On the other hand, a woman seeking a long term relationship could prefer a less intelligent but honest man, who compensates by long term provisioning, protection and a greater investment in childrearing.”

It is possible that for a man, honest signalling of intelligence, in conjunction with other cues, helps them to differentiate from male competitors. If females are looking for different combinations of intelligence as signals of male parental investment, men may benefit from signalling traits that will appeal to at least some women, some of the time. Arguably, sexual selection would then be favoring a diverse range of intelligence in men, though more intelligent men may have an advantage if they are more successful at ‘cuckolding’ their less intelligent (but more committed) rivals.

While there is probably more to the story, it seems to matter that men are able to signal their intelligence clearly. But when it comes to women, different signals appear to be more important. 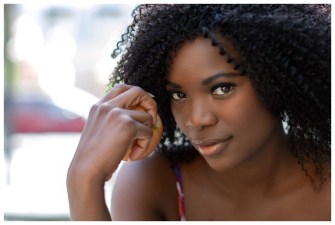 According to Kleisner, “perceived intelligence is positively correlated with attractiveness in both men and women.” This isn’t a huge surprise. People are drawn to, and influenced by, good looking humans. But it’s interesting that the “correlation was much stronger in the judgement of women’s faces… than those of men.”

One reason might be the halo effect. The study explains that:

But here’s the rub. Attractive people aren’t actually more intelligent. Kleisner’s study “did not observe any significant correlation between measured IQ and attractiveness.”

Nevertheless, the perception still carries weight and likely affects our behaviour and decision making. It’s widely noted that attractive people get paid more, and get hired and promoted sooner than their less attractive colleagues.

So what about the women who do like to signal intelligence, and who aren’t interested in conforming to a homogenous gender stereotype? For them, this next one might be a bit of a bummer. 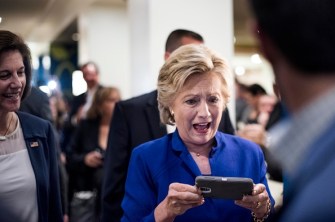 Yep. Perceived intelligence is positively associated with friendliness and a sense of humour in both sexes, “but negatively related with perceived dominance in faces of women.”

This appears to back up recent claims about successful men being widely praised, while successful women are deemed abrasive or intimidating. Call it the ‘Hillary effect,’ if you will.

Though it’s not just women who sometimes get a bad rap for traits that are largely beyond their control.

4.) Men With Very High IQs Are Perceived As Less Intelligent 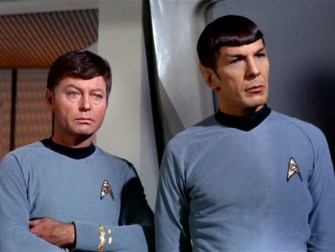 Why would this be? The more intelligence the better, right? Not necessarily. Kleisner reports that:

“Men with an IQ higher than 140 are perceived as relatively less intelligent (see Fig. 4.), which can reflect an adaptation to an upper intelligence limit as men with an extremely high IQ could find such practical tasks, such as the care and protection of women and offspring, less rewarding. Though intelligence does not positively correlate with mental disorders or anomalies, there are some indications that extremely high intelligence combined with other factors such as creativity might carry a potential risk for various mental disorders [44]–[46].”

It would seem, then, that intelligence is not valued for its own sake, but as an adaptive trait conducive to reproduction and survival. Returning to the ‘mixed mating strategy,’ women are looking for varied types of intelligence and other cues of genetic fitness, and their preferences change over time. Very high intelligence could be genetically desirable, as it is associated with high status, greater wealth and resources. However, as Kleisner indicates, very high intelligence may also be associated with poor social and emotional intelligence as well as low stability, earning potential and male parental investment.

In evolutionary terms, you actually could be too clever for your own good!

5.) There Is A Stereotype of An Intelligent Face 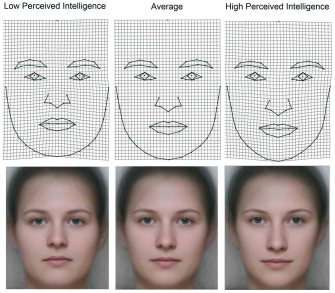 Visualizations of shape regression on perceived intelligence in women illustrating shape differences between faces with attributed high intelligence and low intelligence compared to an average configuration in the middle.

Finally, Kleisner found that there are clear and consistent facial traits that both men and women perceive as intelligent. He reports:

But Kleisner found that this perceived ideal appears to be an “intelligence-stereotype,” as the study did not identify any key morphological traits that predict general intelligence. The implication Kleisner draws is that the study participants, “accurately assessed intelligence from faces of men based on visual cues that simply are not explicable from shape variability in men’s faces.”

Weird. But still significant, especially in a world where images and perception counts for more than ever. A time where we routinely swipe left and right based on a few selfies. While such an activity is often branded as superficial, this study indicates that heterosexual women may genuinely be able to extract more information from a simple picture of a prospective partner than a heterosexual man can. Even if we don’t quite know what it is about men’s faces that they’re picking up on.

So ladies, when it comes to swiping left or right, the next time you come across a clever looking chap on a dating app, he is probably actually intelligent!

And guys, when you bemoan that the pictures of the girls on Tinder all look pretty much the same, there might be something in that as well.

Figure 4. Graph demonstrating linear positive and quadratic negative relationship between IQ and perceived intelligence in men (a) and women (b).

Related
Starts With A Bang
Ask Ethan: Do my atoms really “touch” each other?
When you bring two fingers together, you can feel them “touch” each other. But are your atoms really touching, and if so, how?
13.8
Why the origin of life and the Universe itself might be forever unknowable
There might be a hard limit to our knowledge of the Universe.
Hard Science
200 years of exploring Antarctica
What we’ve learning from the world’s coldest, most forbidding, and most peaceful continent.
Sponsored
4 misleading personal finance tips
Personal finance advice is often over-simplified and fails to consider economic research or people’s unique circumstances.
Strange Maps
Europe’s stunning digital divide, in one map
Some Europeans really don’t want to use the internet.
Up Next
The Present
Remarkable science deserves remarkable support
Sponsored by the Hertz Foundation