It is no secret that belief in climate change in America is strongly divided along party lines, a fact we were reminded of in last week’s Republican leadership debates. The relationship was assessed in an experiment by Dan Kahan published in Advances in Political Psychology earlier this year, which demonstrated that there exists an extremely bizarre paradox that is as mind bending as it is troubling. Believe it or not, the more Republicans know about science, the less likely they are to believe in climate change.

The Ordinary Science Intelligence measure which runs across the bottom of the graphs above measures how likely someone is to answer tests of scientific knowledge and reasoning correctly. For example, someone with an average Ordinary Science Intelligence score has a 70% chance of giving the correct answer to the simple scientific question “electrons are smaller than atoms – true or false”. Someone would have to be a full standard deviation below average (i.e. in the 16th percentile) to be more likely than not to get this question wrong.

As the graph above shows, a Democrat with an average level of scientific understanding has an 80% chance of believing in global warming, while the equivalent Republican has only a 20% chance. Astonishingly, this number falls even further as Republicans’ scientific literacy increases.

Interestingly, we see the same shocking pattern among religious people who are asked if they believe in evolution – as their knowledge of science increases, their likelihood of believing in evolution actually falls: 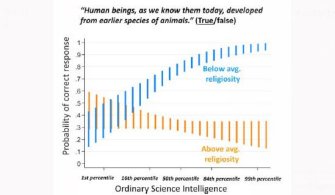 Why is this case? At its core, it seems the answer comes down to identity, confirmation bias and motivated reasoning. Humans are tribal. Asking whether you are left wing or right wing is like asking what football team you support. People tend to think of themselves as supporters of one team or another and rarely switch sides. We surround ourselves with people who share our views, we watch news and seek out evidence that fits our side’s agenda; and science notwithstanding, we conveniently ignore anything that doesn’t support our team and our way of life.

This data may explain the behavior of the candidates in the recent Republican leadership debates who shied away from discussing climate science, instead preferring to attack solutions to climate change with such words of wisdom as “America is not a planet” from Marco Rubio. No, America is not a planet and yes, of course we will have to unite around the world to fight climate change.

In last week’s debate, three Republican candidates:  Rubio, Christie and Walker, at least accepted that climate change is real, which suggests the party may be in the midst of taking an important step forward, even though all the candidates stubbornly refused to agree on any action to prevent climate change.  It may be a case of one step forward and two steps back.

For whatever reason, climate change has become a fiercely partisan issue in the United States. If we are ever to have a hope of minimizing its catastrophic consequences, we must first understand this, and second, find ways to move past this.

Weekend Diversion: Mockery Gets You Nowhere

Image credit: Carina Nebula, via NASA, ESA and the Hubble SM4 ERO Team.If Americans get a “D” in science, what should the A-students do?“It is worthwhile, too, to warn the […]