The world loves bananas. The fruit, which goes back to the jungles of southeast Asia around 500BC, is grown in about 150 countries. Over 100 billion bananas are eaten annually around the world, including the rural communities of Uganda, where the East African Highland cooking banana, eaten chopped-up and steamed, is a key component of the local diet.

The world, and rural Uganda in particular, has a problem, though: Pro-Vitamin A deficiency. The World Health Organization reports that 190 million pre-school children don’t get enough of this micronutrient. A lack of Vitamin A can be fatal, or cause blindness — an estimated 650,000 to 700,000 children die each year, and several hundred thousand lose their sight — and vitamin A deficiency can also cause a host of other problems including delayed growth and infertility. Recently, scientists at Queensland University (QUT) of Technology in Australia have announced a way to use the extremely popular fruit as a vehicle for solving this Vitamin A deficiency problem: They’ve developed the genes required to produce what they call “golden bananas.” What makes them golden-orange is the amount of Vitamin A they pack. Take a look for yourself: 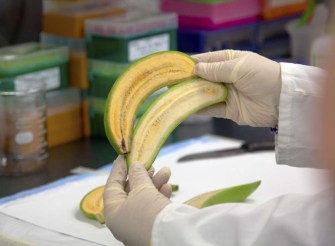 The decade-long, $10 million humanitarian project was led by James Dale of QUD, and funded by the Bill & Melinda Gates Foundation and the UK Government’s Department for International Development.

The researchers tried gene combination using hundreds of banana varieties —there are about a thousand of them — field-tested the results in north Queensland, to produce a satisfactory genetic cocktail. “What we’ve done is take a gene from a banana that originated in Papua New Guinea and is naturally very high in pro-Vitamin A but has small bunches, and inserted it into a Cavendish banana,” says Dale.

For Uganda, the scientists aren’t trying to replace the EAHB as the go-to banana. They’re just interested in improving it since, already, “The East African Highland cooking banana is [already] an excellent source of starch,” Dale says. So now Ugandan PhD graduates from QUT have taken the golden-banana genes back home in test tubes. They’ll be overseeing the genes’ insertion into local bananas and tracking the field trials for the new golden EAHBs. They hope to have them growing en masse for food purposes in 2021.

The REV can collect and melt 5 tons of plastic a day.