We’re not really sure how our moon formed. There are a few theories based on the clue that the composition of earth and the moon are so similar. The most commonly accepted idea is that Theia — a theorized proto-planet about the size of Mars — collided with the earth, breaking off debris that became trapped in orbit around our planet. But there’s no corroborating evidence of Theia’s existence, so…Other scientists have proposed that a series of smaller impacts threw materials up and out, which formed into rings of dust, then moonlets, then the moon as we know it. It’s also possible the earth and moon formed at about the same time.

Now scientists have discovered evidence supporting the idea of a major impact or explosion, and in a surprising place: debris left behind by the very first U.S. test of a plutonium bomb. 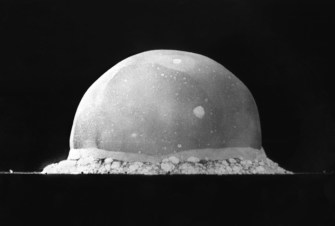 The test was code-named “Trinity,” and it occurred on July 16, 1945 in the Jornada del Muerto desert southwest of Socorro, New Mexico. The blast was equivalent to 20 kilotons of TNT, and the heat it generated was epic: 14,432° Fahrenheit, with an increase in air pressure of close to 80,000 atmospheres. Intense. “It is as close as we can probably get to conditions that you might envisage on a planetary body in the early solar system,” according to James Day from the Scripps Institution of Oceanography at the University of California, speaking to Leah Crane for New Scientist. What Trinity left behind that has researchers so intrigued is trinitite, a thin sheet of primarily green glass. There’s something about it that’s tantalizingly similar to what’s been learned about rocks brought back from the moon. 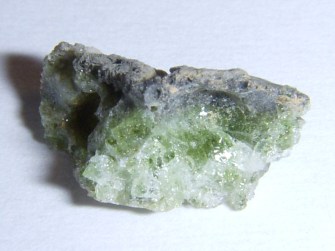 Since the Trinity blast was so thoroughly documented, scientists have a unique opportunity to analyze a material with the benefit of an unusual degree of certainty about its origin, and and unusually good chance of working out why trinitite is what it is.

One of the perplexing aspects of the moon is its lack of water and other volatile materials that have a low boiling point. Zinc is one of those volatiles.

In looking at the distribution of zinc throughout the Trinity blast site, researchers found that the closer to the detonation, the less zinc they found, particularly the more volatile lighter isotopes that likely were evaporated in the blast. The moon, likewise, has little in the way of these lighter zinc isotopes, while heavier less, volatile ones remain, as they also do in the trinitite.

Here’s the surprise: The mix of heavy-to-light zinc isotopes at the Trinity site is identical to what’s seen in the moon rocks. As Day notes, “What’s critical here is that the fractionation factors — how the heavy and light isotopes separate from each other — exactly match.” 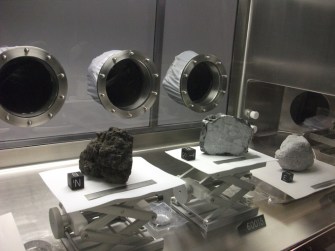 This lends tangible support to theories in which they moon was created during a single violent explosion such as the collision with Theia. Less happy with the new study will be those who expect there to be water hiding beneath the lunar surface — an explosion hot enough to burn off all of the volatiles was probably too searing to have left any water behind at all.

“Salvator Mundi” sold for a record-breaking $450 million in 2017, but is it really as valuable as people were led to believe?
Up Next
Hard Science

The causes of hit products are themselves uncausable. ‘Hit Makers’ by Derek Thompson explains why we know how to make songs, but not hits.