What is the 'Book of Changes'?

The I Ching serves as a foundation for many Eastern philosophies and Western mathematics.

The I Ching or, as many Western audiences know it, the Book of Changes, is a book that is thousands of years old. Throughout the years it has served as an all-encompassing philosophical treatise of the universe, a guide toward ethical living, a guidebook for ruling, and as an oracle for one's personal life and psychic future. Two of the most major branches of Chinese philosophy, Confucianism and Taoism owe their creation to this foundational book.

Here and there it popped up for Western scientists and philosophers to study — the first European commentary was written in the late 15th century. In the 1950s and subsequent '60s counterculture, the I Ching held a special place as a divinatory guidance book for living a better life. The book has spawned countless interpretations, commentaries and dueling schools of thought. It is by far the most consulted book in China and East Asia.

All of this said, the exact origins of the I Ching is shrouded in myth and mystery. According to a mythological version of the creation story, the Chinese hero Fu Xi stared into the skies and the world around him and discovered that everything could be arranged in eight trigrams. That is, three stacked lines either broken or solid, which reflect yin and yang — the cosmic duality of the world and void.

There is historical record that, in 1050 BCE, Emperor Wen of the Zhou dynasty changed the trigrams into hexagrams (six lines) which created 64 different combinations. This is the Book of Changes that we now know today.

The I Ching and Carl Jung 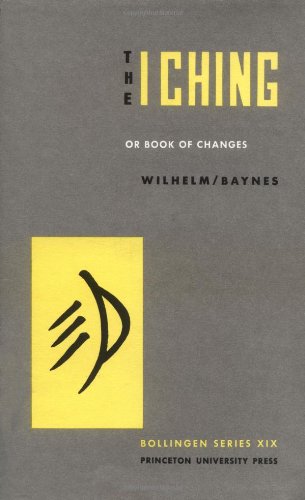 German sinologist, Richard Wilhelm's translation of the I Ching stands as the definitive work to read if you're interested in learning about the ancient work. In a foreword to the book, Carl Jung, psychiatrist and founder of analytical psychology, expressed his intrigue on the divinatory aspect of this mysterious book:

"For more than 30 years I have interested myself in this oracle technique, or method of exploring the unconscious, for it has seemed to me of uncommon significance. I was already fairly familiar with the I Ching when I first met Wilhelm in the early 1920s; he confirmed for me then what I already knew, and taught me many things more."

Jung used the oracle with his patients during therapy sessions. There was a great deal of meaningful and relevant answers to his patients' questions. Coming from a scientific background where demonstrable causality is gospel, Jung was very curious to see why this ancient book was so apt to a seemingly infinite amount of circumstance.

"... A certain curious principle that I have termed synchronicity, a concept that formulates a point of view diametrically opposed to that of causality. Since the latter is a merely statistical truth and not absolute, it is a sort of working hypothesis of how events evolve one out of another, whereas synchronicity takes the coincidence of events in space and time as meaning something more than mere chance."

Even today, such talk of synchronicity gets eye rolls from the materialist and positivist crowd as just a bunch of New Age hogwash. "Western scholars have tended to dispose of it as a collection of 'magic spells,'" wrote Jung in the foreword.

Jung believed that the traditional Chinese mind, as he saw their work laid out in the I Ching, is preoccupied with the chance aspect of natural events. Our notion of coincidence is the main concern of the I Ching. Jung would go on to propose that psyche and matter are one in the same and that through synchronicity, inner psyche and the outside world are intrinsically connected in a way unknown to scientists still tied to their irrefutable axiom truth of causality.

Jung explains that the ancient Chinese school of thought was more modern than we suspected.

"The ancient Chinese mind contemplates the cosmos in a way comparable to that of the modern physicist, who cannot deny that his model of the world is a decidedly psychophysical structure. The microphysical event includes the observer just as much as the reality underlying the I Ching comprises subjective, i.e., psychic conditions in the totality of the momentary situation."

The Book of Changes and Alan Watts

Alan Watts - The I Ching

The essence of all of Alan Watts' philosophies and arguments largely pertain to remedying the apparent separation of dualities and realizing that in its stead is always an interdependence of opposites. Under our limited dualities of language this seems to be a universal truth. This implies that and that implies this. Order and chaos, self and other and so on.

Alan Watts saw that the implicit idea of yin and yang was a fundamental way of viewing reality. It is within this infinite mix of yin and yang in which the multiplicity of reality arises.

In fact all information whatsoever can be translated into terms of yang and yin.

"The Book of Changes is thought to be the oldest of the great Chinese classics and to date from perhaps as early as 1300 BCE. The book may also go back to the earliest phases of human thought because the I Ching is really the ground plan in the way in which not only the Chinese think, it's almost a mapping of all the thinking processes of man."

Watts was aware of the fact that the system of arithmetic which is used by digital computers came from the I Ching. Here he refers to binary code:

"We have a binary system of arithmetic zero and one in varying arrangements. Digital computers use a number system which consists only of the figures zero and one, out of which you can construct any number and this was invented by Leibniz who got it from the Book of Changes."

The I Ching predates binary code by some 5,000 years — if the earliest estimates of the book's creation are true.

In the late 1600s to early 1700s, Gottfried Wilhelm Leibniz was looking for a better arithmetic method over the decimal system. Leibniz invented binary arithmetic by studying the I Ching. This said, the Book of Changes being an influence for binary code is an understatement.

The title of his paper was: "Explanation of the binary arithmetic, which uses only the characters 1 and 0, with some remarks on its usefulness, and on the light it throws on the ancient Chinese figures of Fu X."

Leibniz would surely be shocked at what has succeeded his invention. Everything that we compute and represent digitally and experience is at its core a complex string of binary signals.

Watts found this a profound insight into the validity of the I Ching and its ancient wisdom:

There's a sudden unexpected link between the most sophisticated mathematical machinery and a book originating at least in 1300 BC.

There is no final authority on the cosmic truths that the I Ching reveals. But it does offer us an ancient and renewed paradigmatic way of viewing the world.

Alan Watts leaves us with a fitting remark on its place in the world:

"This book is somehow always with us, but this then is a way of helping your own multivariable brain arrive at decisions cooperating with your own mind because then again after you've tossed your 64 sided coin, the oracle that you read and explains each particular hexagram in the Book of Changes is a sort of Rorschach blot, it is a very laconic remarks to which everybody reads just exactly what they want to read."

Whether you're utilizing it as a tool to dig into your psyche, consulting for advice like kings of yore or following it as a personal philosophy — the I Ching still has much to tell us.

The research also raises an intriguing question: Can we get around the Heisenberg uncertainty principle?