In 2008, an asteroid exploded 37km above ground across the Nubian desert of northern Sudan. The fragments contained both rock and rough diamonds.

What scientists have figured out since, after gathering about 50 pieces of what was left, is that it came from the first 10 million years of our solar system — from a planet around the size of Mars or Mercury that ultimately was destroyed. 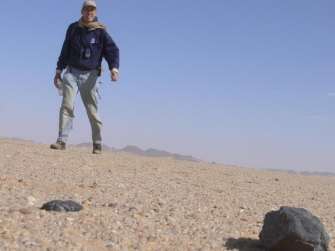 Known as the Almahata Sitta meteorites, scientists used transmission electron microscopy and electron energy-loss spectroscopy to ascertain that the materials, including the diamonds, can only be formed above pressures of about 20 gigapascals (GPa). This only happens within a planetary body.

What they theorize is that the protoplanet these pieces ultimately came from likely collided with others in that first 10 million years, causing Almahata Sitta — and others — to float about the solar system until they, too, collided with another planetary body; in this case, Earth. Such items account for less than 1% of objects that collide with our planet.

From the study, published in Nature Communications:
“in the first million years of the solar system. Mars-sized bodies (such as the giant impactor that formed the Moon) were common, and either accreted to form larger planets, or collided with the Sun or were ejected from the solar system. This study provides convincing evidence that the ureilite parent body was one such large ‘lost’ planet before it was destroyed by collisions.”

Related
The Past
How the death of alchemy gave birth to modern science
Far from practicing witchcraft, the experimentation of medieval alchemists helped bring about the Scientific Revolution.
The Well
This is what the fourth dimension looks like
Left–Right, Back–Forth, Up–Down. What’s the fourth dimension?
▸
3 min
—
with
Brian Greene
The Present
How heat pumps of the 1800s are becoming the technology of the future
Innovative thinking has done away with problems that long dogged the electric devices — and both scientists and environmentalists are excited about the possibilities.
Starts With A Bang
JWST’s hunt for most distant galaxies gets double boost
Along with gravitational lensing and ALMA’s incredible long-wavelength spectroscopy, JWST is reshaping our view of the early Universe.
Thinking
Finding your essential self: the ancient philosophy of Zhuangzi explained
Adopting a healthy scepticism towards inherited ideas means “emptying the container of the Self.”
Up Next
Starts With A Bang
Five Years After The Higgs, What Else Has The LHC Found?
Sure, we found the Higgs Boson at the LHC earlier this decade. But what else has, and more importantly, hasn’t turned up?It’s now just over five years since the two major […]