During a plague epidemic in Medieval Europe, cats were killed (and later dogs) for allegedly spreading the Black Death. The severe drop in the cat population only made matters worse, and soon people came to realize that the households that had illegally kept their cats had escaped the plague. Cats protected people from the disease by hunting and killing the rats carrying the fleas that carried the plague. A similar drama is being played out today, as many parents are convinced that a rise in autism rates in the 1990s can be attributed to vaccines. And they are therefore choosing not to vaccinate their children, which is a dangerous mistake.

There is no scientific evidence of an autism epidemic. Scientists have simply learned more about the complex spectrum of autism in recent years, leading to an increase in diagnoses. There is still so much that scientists do not know about autism. The research into mental disorders has been notoriously chained to societal norms, and therefore limited; for instance, the American Psychiatric Association did not remove homosexuality from the Diagnostic and Statistical Manual of Mental Disorders (DSM) until 1973. 1973. Autism research is still a relatively new field, which is why there shouldn’t be a witch hunt against vaccines.

For more on this issue, watch Stephen Colbert grill Paul Offit, the director of the HOP Vaccine Education Center, in the video below.

The recent outbreak of mumps in Ohio has drawn attention to the importance of vaccination. There’s also a nationwide rise in cases of measles and whooping cough. The anti-vaccine backlash is of course part of the problem. Some cases involve families, newly immigrated to the U.S., that did not have access to vaccines. Incomplete vaccination records are also a serious issue, which was recently addressed by the Bill & Melinda Gates Foundation.

To help parents remember to vaccinate their children the Bill & Melinda Gates Foundation held The Records for Life contest, an initiative that challenged designers to create innovative cards helping parents keep track of vaccine shots. The most memorable cards, so to speak, were selected by Bill and Melinda Gates, Walt Orenstein, the Associate Director of the Emory University Vaccine Center and former Director of the United States Immunization Program, and Jocelyn Wyatt Co-Lead and Executive Director of design powerhouse IDEO.org, among other judges who are leaders in the areas of health or design.

Here are three designs from the competition, starting with the Grand Prize winner: 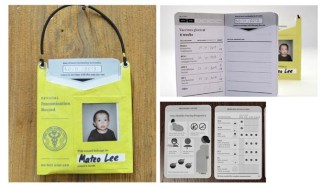 Name(s) & Organization (if applicable): David ODonnell, Elena Valentine, Andrew Bates, Nick Maschinski, Arielle Deane, Tiffany Huang and Amy Guterman on behalf of gravitytank Project Title: Project Pasteur Description: Pasteur is an integrated system of vaccination records and health education tools that supports the needs of both caregivers and health workers. It includes a simple, legible record that functions differently in the home and during vaccinations and a distinctly separate, primarily illustrative set of health education cards. 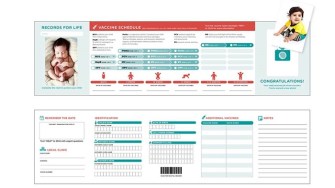 Name(s) & Organization (if applicable): Amanda Buck, Sally Maier, Chen Yu and Nate Gulledge on behalf of Maryland Institute College of Art Project Title: A Record for Life Description: Our proposal is a clear, adaptable, durable, and valuable solution for both health workers and caregivers. The form simplifies record keeping and allows for easy reproduction and digitization, adding scalability and redundancy in the medical data system. Our geographic focus is India s developing regions, however, we believe the solution could be applied successfully on a global scale. 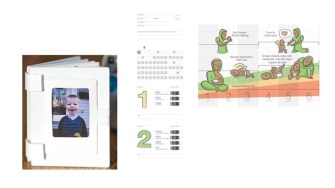 People around the world, mostly Generation Z, are obsessed with the look and feel of gothic, elitist universities. Why?
Up Next
Politics & Current Affairs

This week the agency put out a Request for Information in hopes of attracting creative thinkers who can help them “achieve the most science at minimum cost.”