The human immune system is ever-eager to leap into action against foreign irritants. Maybe a little too eager. At least that’s how allergy sufferers feel when trying to quell the runny noses, coughing, and other aggravating allergic reactions that make certain times of year and environments not fun. When we encounter an allergen, our systems produce an antibody, IgE, that turns on the immune cells in charge of those symptoms. Allergy medicines aren’t all that effective at relieving the suffering. But put down that Kleenex: a team of scientists has found an effective way to prevent IgE from binding to those cells and setting them off in the first place.

A collaboration of researchers from the Departments of Engineering and Molecular Biology and Genetics at Aarhus University in Denmark and researchers with Marburg/Giessen University Hospital in Germany has just published a study in which they describe the molecular interactions of a non-human single-body antibody, or “sdab.” It can block IgE’s receptors in immune cells, keeping them from making us miserable. The new research has just been published in Nature Communications. “We can now precisely map how the antibody prevents binding of IgE to its receptors,” co-author Nick Laursen tells AU Engineering. “This allows us to envision completely new strategies for engineering medicine of the future.” The new understanding may help take the field beyond what’s already available in the form of IgE inhibitor omalizumab, marketed as injectable supplemental allergy treatment XOLAIR®.

These sdab proteins are the binding element of heavy chain antibodies in camels and their cousins, some species of cartilaginous fish such as sharks and rays, and in llamas. As the study says, “Their small size and peculiar biochemical features render sdabs highly versatile molecules.”

It’s the llama-derived sdab 026 whose behavior in humans the researchers documented by combining it, ex vivo, with blood cells from people allergic to birch pollen and insect venom. The thinking is that what works with these allergies will also work with others. (No in vivo trials have yet taken place.) 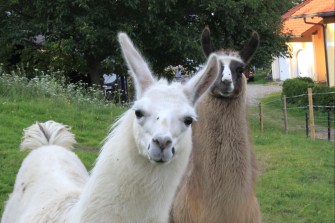 Of particular note to the scientists is the way in which sdab 026 interrupts the binding of human IgE with two specific immune-cell effectors, CD23 and FceRI. Without that connection, the immune cells never become active. Also interesting: when sdab 026 is introduced, it removes any existing IgE molecules. Subsequently produced IgE has no effect anyway, since immune cells’ effectors no longer respond to it. Another study author, Edzard Spillner, says, “Once the IgE on immune cells can be eliminated, it doesn’t matter that the body produces millions of allergen-specific IgE molecules. When we can remove the trigger, the allergic reaction and symptoms will not occur.” sdab 026 was also incredibly fast at blocking CD23 and FceRI: just 15 minutes.

Part of what has the researchers so intrigued and hopeful are the characteristics of sdab 026, which, according to Spillner, is “easily produced in processes using only microorganisms. It is also extremely stable, and this provides new opportunities for how the antibody can be administered to patients.” Its chemical structure may make delivery to patients possible through inhalation or swallowing, an easier option than the injection that XOLAIR requires.

The study notes that sdab 026’s behavior may also suggest the invention of novel, similarly performing molecules with an even lower mass. “Thus, our description of the 026 sdab mode of action is likely to accelerate the development of anti-allergy and asthma drugs in the future,” concludes the study. While more research and safety testing obviously needs to be undertaken, this is a promising start for the sneezers among us.

Related
Life
Scientists use CRISPR to insert an alligator gene into a catfish
Disease kills off 40% of farmed catfish. This gene protects them.
Neuropsych
How you breathe affects your brain
Your breathing rhythm influences a wide range of behaviors, cognition, and emotion.
Health
What happens when regular porn watchers abstain for a week?
Researchers watched for signs of withdrawal — but didn’t find any.
Neuropsych
Daily caffeine intake temporarily alters your brain structure
Compared to people who took a placebo, the brains of those who took caffeine pills had a temporarily smaller gray matter volume.
Thinking
Why you should laugh at yourself, according to Seneca and Nietzsche
“It is more human to laugh at life than to lament it.”
Up Next
Surprising Science
E-cigs shown to be healthier than cigarettes—but still not healthy
A new meta-analysis of over 800 studies shows that e-cigs are healthier than cigarettes. But the authors don’t give them a clean bill of health.