Solar has a lot of potential. Consider that the Earth receives enough solar power in one day to fulfill the whole world’s energy needs for a year. Although the price has fallen dramatically, solar cells are costly, difficult to set up, and are made with expensive and rare materials. All of this leads to an over-reliance on fossil fuels. That’s because we use inorganic cells made of silicon.

Scientists have been dreaming of making solar panels and semiconductors out of organic cells, using inexpensive, flexible, and widely available materials, such as plastic. The problem is that traditional organic cells have been terribly inefficient. Now, researchers at the Randall Lab at the University of Michigan, Ann Arbor, have made a stunning breakthrough in organic solar cells. This could allow them to be manufactured inexpensively, leading to the day when they can be interwoven into almost any surface.

Engineering professor Stephen Forrest led the study. He and his team were able to get electrons to travel farther in organic materials than anyone ever before. This would revolutionize lighting, energy production, and informational displays. The materials could also be printed out in great big sheets and laminated invisibly onto any surface. The findings were published in the journal Nature. 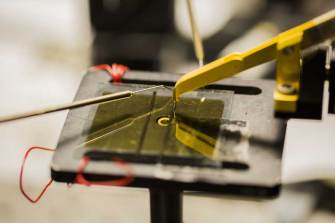 An organic solar cell being tested inside the Randall Lab. U-M researchers found a way to get electrons to travel further through materials for organic solar cells and semiconductors, than was ever thought possible. Credit: Robert Coelius, Michigan Engineering.

“For years, people had treated the poor conductivity of organics as an unavoidable fact,” Prof. Forrest said, “and this shows that that’s not always the case.” The secret is a thin layer of fullerene molecules. Also known as buckyballs, these are molecules made of up to 60 carbon atoms (C-60). It’s shaped like “a hollow soccer ball,” according to the late British scientist, Sir Harry Kroto. He and his team won the Noble Prize in chemistry for discovering them.

A layer of fullerene allows electrons, each knocked free by a photon, to travel several centimeters farther within an organic solar cell than previously thought possible. Before, such electrons could travel just a few hundred nanometers, tops. While inorganic cells have atomic networks that are tightly bound, allowing electrons to travel through easily, organic materials have much looser bonds. As such, electrons often get trapped in imperfections in the material. But this thin layer of fullerene acts as a flagstone path, allowing electrons to jump from one buckyball to another, in order to get where they need to go.

Quinn Burlingame was an author on the study. He’s a graduate researcher in the electrical engineering and computer science departments at U-M. “This discovery essentially gives us a new knob to turn as we design organic solar cells and other organic semiconductor devices,” he said in a press release. “The possibility of long-range electron transport opens up a lot of new possibilities in device architecture.”

With today’s solar cells, the electrode needs to collect electrons near the point of generation. Now, types can be designed that allow for the free movement of electrons, which can then be collected a distance away from generation. As a result, an invisible grid can be fashioned. This opens up the possibility of solar windows and energy collection through all sorts of surfaces. 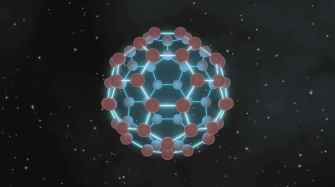 A buckyball with 60 carbon atoms. It has 12 pentagons and 20 hexagons and resembles a soccer ball. The pentagons would be the black spots on the ball. Credit: NASA/JPL-Caltech.

Researchers arrived upon this breakthrough by accident, according to Burlingame. The team was experimenting with different forms of organic solar cells, hoping to find a particular architecture to boost efficiency. They were fiddling with a well-known vacuum thermal evaporation technique, using a thin layer of fullerenes, each containing 60 carbon atoms, when they suddenly found they had somehow increased power production. Within organic solar cells, photons from sunlight knock electrons free from their molecules. A second layer of fullerenes was used to trap the electrons inside the material.

What got them really curious was that the electrons skated across the material outside the bounds of where power was generated. It took months for the team to understand what was going on. The electrons were falling into what’s known as a power well.

Graduate researcher and study co-author Caleb Cobourn, of U-M’s physics department, said in a press release, “You can imagine an energy well as sort of a canyon—electrons fall into it and can’t get back out. So they continue to move freely in the fullerene layer instead of recombining in the power-producing layer, as they normally would.” He added, “It’s like a massive antenna that can collect an electron charge from anywhere in the device.”

Researchers are excited to explore the larger implications. Prof. Forrest said, “I believe that ubiquitous solar power is the key to powering our constantly warming and increasingly crowded planet, and that means putting solar cells on everyday objects like building facades and windows.” He added, “Technology like this could help us produce power in a way that’s inexpensive and nearly invisible.” All the applications associated with this discovery are theoretical, for now. Forrest believes widespread use is probably about a decade a way.

Related
Neuropsych
Psychology studies that go viral are likelier to be bogus
A new 20-year analysis of over 14,000 psychology studies finds that a study’s media coverage is negatively linked to its replicability.
The Future
How a device transmits radio waves with almost no power
Apart from the energy needed to flip the switch, no other energy is needed to transmit the information.
The Present
Radical idea: Redraw the U.S. map as a nation of city-states
While cities drive national economic growth, their political geography means they cannot effectively deal with inequality, poverty, and other socioeconomic problems.
The Learning Curve
Why do high IQ people stagnate in their careers? Emotional intelligence
Research suggests that emotional intelligence is more vital for success than IQ.
The Present
Even in the age of AI, some problems are just too difficult for computers
Computers are growing more powerful and more capable, but everything has limits
Up Next
Thinking
What do you really believe? Take the Truth-Demon Test.
Do we really believe everything we say? Are you always trying to establish the truth when you argue? This thought experiment will help answer these questions.