A few years ago, at an Osaka, Japan recycling plant, scientists discovered a bacteria called Ideonella sakaiensis that eats one of the most common forms of plastic, known as polyethylene terephthalate or PET. That form of plastic is found in water bottles, food containers, and polyester. You know the items with the “1” symbol in your recycling bin? Those tend to be made of PET.

Researchers from Britain’s University of Portsmouth and the U.S. Department of Energy’s National Renewable Energy Laboratory (NREL) were trying to model the enzyme and ended up with a mutant strain of the same thing, with a crucial difference: it eats plastic even better. 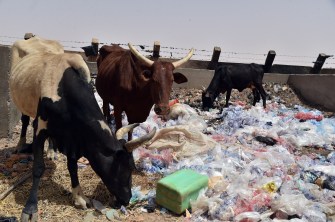 “We hoped to determine its structure to aid in protein engineering, but we ended up going a step further and accidentally engineered an enzyme with improved performance at breaking down these plastics,” said NREL’s lead researcher Gregg Beckham.

University of Portsmouth professor John McGeehan, who conducted the research with Beckham, went even further in a statement.

“Serendipity often plays a significant role in fundamental scientific research and our discovery here is no exception. Although the improvement is modest, this unanticipated discovery suggests that there is room to further improve these enzymes, moving us closer to a recycling solution for the ever-growing mountain of discarded plastics.”

There’s speculation that, with further mutations, the PETase mutant enzyme might even be used to degrade/eat the newer kinds of plastic known as Polyethylenefurandicarboxylate or PEF.

It’s at least a promising beginning in this field of study.

And here’s author Laurence Gonzales on our culture of garbage.

In hell, we assume a position of moral superiority, looking down over the sinners and the poor decisions that led them to this wretched place. In heaven, Dante is looking down upon us.
Life

Start fighting back against planned obsolescence.
Starts With A Bang

It's been precisely 13.8 billion years since the Big Bang occurred. Here's how we know.
Neuropsych

Great genius is not born of lightning bolt-like moments of inspiration. In reality, perseverance plays the biggest role.
Up Next
Surprising Science

What was Project MKUltra? Inside the CIA’s mind-control program

Sometimes conspiracy theories turn out to be true, like the one about how the CIA tried to use LSD to find a mind-control drug.