Sexism is still pervasive in our society. Women being paid less than men is a rallying cry in this upcoming election, a problem both Democratic candidates say they are going to fix. Less well known is that sexism pervades the hallowed halls of science. For instance, one study published in the journal PNAS found that female applicants going for a lab manager position at Yale, with similar credentials as male candidates, scored lower in aspects such as competence and hire-ability (whatever that means), and were thought to be less willing to mentor students.

The starting salaries offered to the female candidates was also lower. Surprisingly, both male and female scientists were found guilty of gender bias in this study. A good portion of this sexism was subtle, and the scientists proposed sound reasons for making the judgments that they did. Yet, when the applicants were compared side-by-side, the bias was undeniable. It is also hard to ignore that the majority of scientists are and always have been male. Due to this, the male perspective has seeped into how we talk about science, or at least certain aspects of it.

Though we like to think of the language of science as objective, NYU medical anthropologist Emily Martin revealed gender biases in an aspect of biology in her groundbreaking article, “The Egg and the Sperm: How Science Has Constructed a Romance Based on Stereotypical Male-Female Roles.” According to Martin, textbook writers have imbued the sperm and egg with gender stereotypes. The egg is often portrayed as less worthy than sperm, and so women are depicted as less worthy as a consequence. 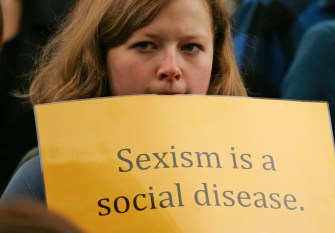 By examining scientific textbooks, Martin found that our reproductive systems are usually depicted as factories to produce sperm or eggs. For women, not only is gamete production important, but the creation of a proper environment for the developing embryo is crucial as well. So if reproductive materials are a means of production, the menstrual cycle must be understood as a failure. According to Martin, medical texts refer to menstruated tissue as “debris,” and menstruation, “tissue death.” Other words to describe menstruation include, “ceasing, dying, losing, denuding,” and “expelling.”

In contrast, the production of sperm is written about with awe and mystery, regardless of whether or not it fertilizes the egg. Remember most never make it very far. The sheer output of the male reproductive system, and the mystery surrounding the change from spermatid to mature sperm, are often discussed with wonder. Martin quotes a classic text Medical Physiology to make her point. “Whereas the female sheds only a single gamete each month, the seminiferous tubules produce hundreds of millions of sperm each day.” Another author marvels as the seminiferous tubules which if stretched out flat, “would span almost one-third of a mile!” But no such enthusiasm is used to explain female reproductive tissues or processes. 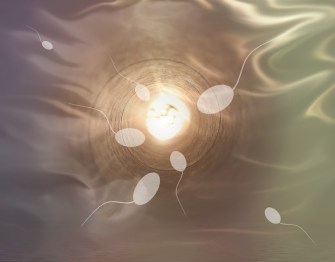 Martin also expands on how explanations of gametes are portrayed. Sperm are produced at an astounding rate, whereas a woman is born with a finite number of eggs, and they are portrayed like inventory, ready to be used one at a time. The sperm are also anthropomorphized as daring adventurers who brave hostile territory in order to fulfill their mission. In this view, the egg is “rescued” by the sperm from being washed away, unused. In truth, it is not necessarily the first sperm to arrive that fertilizes the egg.  In fact, many times it takes much more than one to accomplish the job.

Traditionally, fertilization was depicted as a sperm penetrating the egg. The egg played a passive role. However, a recent study finds that the egg, sensing sperm nearby, sends out a wave of progesterone which activates a receptor on a sperm’s tail, giving it a “power kick,” a boost to make it swim faster that last harrowing distance. This shower of progesterone also helps the tail of the sperm break through the egg’s protective coating. So in fact, the egg plays an essential, active role in conception.

Furthermore, sperm are often portrayed as the protagonist and driving force. The truth of the matter is, sperm cells do not contain brains. Instead of dreams and goals, they randomly thrash about. These sperm venture in each and every direction. It is through sheer chanced stacked by enormous numbers that they are able to fertilize the egg.

How we talk about reproductive biology or indeed any science matters. It is implicit messages that seep into our psyches, particularly when they are nicely packaged in the so-called objectivity of science. While more discoveries and more women in the sciences will help us to erase these implicit gender stereotypes over time, it’s important that anthropologists like Martin investigate and discover biases, for those working so closely with the hardware of the human body may find it difficult to take a step back, and see from what perspective things are being portrayed.

For a different investigation into sexism in the sciences click here:

While most participants fibbed a little bit, laptop users were much more likely to lie – and by a lot more.
Up Next
Strange Maps

Take all the Christians out of the United States and these are the biggest religions for each state: a Buddhist West, a Muslim crescent across the South and Midwest, and a Jewish Northeast.