Two weeks from Tuesday, on April 28, the Supreme Court will hear arguments over whether same-sex marriage is a constitutional right that should be extended to every American in all 50 states. In the two years since the Court struck down the provision in the Defense of Marriage Act (DOMA) defining marriage along strictly heterosexual lines, the number of states where gays may marry has risen from 10 to 37. Here is the national picture: 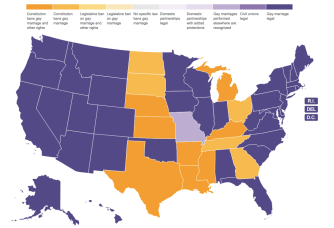 Few could have expected the marriage-equality movement to spread so widely, so fast, after the Court’s 2013 ruling. Popular sentiment on the question has flipped in a single generation: In 1994, only 27 percent of Americans supported same-sex marriage; today, 55 percent do. But do not expect defenders of state bans on same-sex marriage to go down without a fight. Marriage-equality opponents have a portfolio full of arguments at the ready. The traditional claims have been largely abandoned in favor of new, less moralistic, contentions. Some of those are, in my view, wrong but plausible. But as gay marriage opponents have evolved to be less preachy and dogmatic in their tone, some of their arguments have veered into the realm of the truly bizarre.

So I present you with what seems to me, on my admittedly still-incomplete reading of the 30-odd anti-same-sex-marriage amicus (or “friend-of-the-court””) briefs, with the loopiest, craziest, pull-out-all-the-stops worst argument for insisting that marriage remain a heterosexuals-only club. It comes from two “marriage scholars,” Jason Carroll and Walter Schumm:

Yet a definition of marriage that focuses solely on … adult-centric interests is incomplete and denies the Court’s decisions affirming the states’ interests in procreation. However compelling such a definition might be, it is fatally defective if its adoption brings about conditions such that our society fails to reproduce itself over time, or fails to produce enough posterity to sustain existing intergenerational welfare programs.

The “adult-centric interests” the brief writers are referring to include trifles like finding a “soulmate” with whom to share an “intensely private, spiritualized union, combining sexual fidelity, romantic love, emotional intimacy, and togetherness.” Bah humbug! the brief sniffs. These features of a marriage are mere ancillary benefits. The real reason states are in the marriage business is to regulate procreation. And opening marriage to same-sex couples, profs. Carroll and Schumm aver, undermines that goal by sending a dangerous message to would-be marrieds that the institution isn’t necessarily about having kids. Once that sentiment gets out, it’s doomsday. Fewer people will marry. And those who do decide to marry will tie the knot for will-o-the-wisp, flighty reasons like “intimacy” and “togetherness” (and even, horrors, for “romance”). But that’s no way to propagate the human race. Gay marriage isn’t just a bad idea; it might lead to the extinction of the species. And if that’s not enough of a reason to deny gays a constitutional right to marry, there are those “intergenerational welfare programs” to worry about. Yes, you heard it here first: Your gay uncle can get married OR your kids can get their Social Security checks. A troubling trade-off. But of course even that problem will likely prove moot, as gay marriage will mean there won’t even be enough kids to ensure “the survival of the society itself.”

A less nightmarish but perhaps even screwier cousin of this procreation argument has popped up in several states’ defenses of their prohibitions on same-sex marriage. Indiana made the claim in Baskin v. Bogan, and Michigan develops a version of it in its brief to the justices. The argument is this: When heterosexual people have sex, they might conceive and bear children accidentally, and marriage gives them a sanctuary for making their accidents kosher. But homosexuals can’t knock up one another by mistake. Biology militates against that kind of thing. So they don’t need marriage.

New York State’s highest court relied upon just this argument in a 2006 case. Homosexual couples “can become parents by adoption, or by artificial insemination … but they do not become parents as a result of accident or impulse.” By contrast, straight couples have relationships that are “all too often casual or temporary” and therefore need marriage “to create more stability and permanence in the relationships that cause children to be born.” Because they do not have kids willy-nilly, gays and lesbians already have more stable relationships, the Court reasoned; they don’t need the civilizing institution of marriage as much as heterosexual couples do.

As Slate’s Dahlia Lithwick explains, the contention sits in distinct tension with the reasoning behind recent state efforts to protect religious liberty as a pretext for permitting discrimination against gays and lesbians. But that hypocrisy isn’t the argument’s worst feature. The trouble with the procreation claim is plain as day: While not all gay couples will choose to have children (just as some straight couples do not), these individuals will not have a deflating effect on the United States population. There are plenty of people, gay and straight, who are happy to have children, whether they are conceived by mistake or not.

Sooner or later, Earth is going to be hit by a large enough space object to cause significant damage to humanity. Stopping them isn’t easy.
Up Next
Starts With A Bang

The LHC made simple

Image credit: Maximilien Brice, © CERN.If you knew nothing, Jon Snow, here’s what it’s doing in five simple steps.“Let them see that their words can cut you and you’ll never […]