If you thought Kate Bush’s first concert in over 30 years was impressive, just wait until you see the sort of comeback the ozone layer has in store.

From Seth Borenstein of the Associated Press:

“Earth’s protective ozone layer is beginning to recover, largely because of the phase-out since the 1980s of certain chemicals used in refrigerants and aerosol cans, a U.N. scientific panel reported Wednesday in a rare piece of good news about the health of the planet.”

While satellite measurements have suggested for a few years that the hole was beginning to recover, scientists for the first time have confirmed “statistically significant and sustained increase in stratospheric ozone.”

“From 2000 to 2013, ozone levels climbed 4 percent in the key mid-northern latitudes at about 30 miles up, said NASA scientist Paul A. Newman. He co-chaired the every-four-years ozone assessment by 300 scientists, released at the United Nations.” 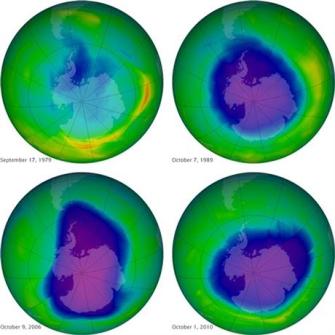 It’s not everyday that an environmental news story can be considered anything but glum. This news serves as an honorable testament to the power of diplomacy. The global community made a solid commitment during the 1980s to reduce usage of ozone-harming chemicals. We may be seeing the first dividends of that agreement.

That said, the ozone layer is still thinner than it was 40 years ago and that big, bad hole still exists above Antarctica. As one NASA scientist explained to Borenstein, things “are on the upswing, but [they’re] not there yet.”

For more about this news and about how the ozone layer protects the Earth from harmful radiation, read the whole story at the Associated Press

In a recent Guardian profile, actor and playwright Sam Shepard declared that American culture is “on [its] way out,” especially since so much of its industry has been off-shored.