We all know how successful Einstein was as a scientist, with his ideas reshaping our understanding of the universe and becoming a part of our everyday thinking and culture. But for all his accomplishments, like transforming our conception of space and time with his theory of general relativity, the Nobel Prize-winning physicist also made some mistakes. Such is the process of science, of course – you test ideas and if some of them turn out to be wrong, you adjust and try other approaches.

Here are 3 of Einstein’s biggest “failures” (probably too strong a word considering how much he actually achieved and that it’s possible he may turn out to be right in the end):

1. The Cosmological Constant – Λ – Einstein himself called this his greatest mistake. He added a cosmological constant to his theory of general relativity in order to address the thorny issue that while he believed the Universe was static and unchanging, it appeared to be dynamic in the equations. The problem arose when it turned out the universe was actually expanding and accelerating at that. Modern scientists think the constant is possibly dark energy, the theoretical force causing the expansion – a concept that often gets denounced by some scientists who think there’s a different explanation. 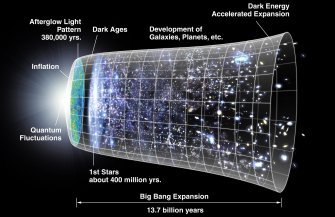 Expansion of the Universe. Credit: NASA/JPL.

2. Quantum Mechanics – Einstein was instrumental in the development of quantum mechanics, the field of physics that describes the behavior of subatomic particles. In fact, his 1905 paper on the photoelectric effect won him the Nobel Prize and had a strong impact on the development of quantum mechanics. And yet he also downright hated quantum mechanics for its mysterious and hard-to-prove ideas and its ultimate conclusion that the universe is uncertain and disorderly. In particular, he was not impressed by the ideas of Shroedinger and his cat, Werner Heisenberg or Niels Bohr, as makes the case Einstein’s biographer David Bodanis in his book “Einstein’s Greatest Mistake”.

3. Gravitational Waves – again, Einstein actually predicted this would be true in 1916 but got cold feet about his discovery, thinking it would never amount to anything.

Gravitational Waves are vibrations or ripples in time and space that are caused by massive space events like the movement of neutron stars or black holes. Supernovae or colliding black holes would cause the strongest such waves.

Einstein, however, thought the waves would be incredibly hard to measure and even doubted the existence of black holes that may be causing them. In fact, in 1936, he tried to publish a paper (which was rejected) that would retract the idea that gravitational waves even exist.

In 2015, scientists were actually able to directly detect gravitational waves for the first time, a 100 years after Einstein’s prediction. The scientists involved were awarded Nobel Prizes for their discovery.

Related
Starts With A Bang
The Universe’s most unbreakable symmetry
The combination of charge conjugation, parity, and time-reversal symmetry is known as CPT. And it must never be broken. Ever.
13.8
The weirdness of quantum mechanics forces scientists to confront philosophy
Though quantum mechanics is an incredibly successful theory, nobody knows what it means. Scientists now must confront its philosophical implications.
Neuropsych
Why is a Starbucks loyalty rewards program making customers so angry?
The rewards price to get a free cup of hot coffee at Starbucks is going up.
Empowering growth
7 essential management training topics for every team leader
From emotional intelligence to problem solving, these management training topics will set team leaders up for success.
Thinking
What if you could rewire your brain to conquer suffering? Buddhism says you can
For Buddhists, the “Four Noble Truths” offer a path to lasting happiness.
Up Next
Diversity & Inclusion
3 Ways to Introduce Diversity Training Programs to Your Organization
Diversity training programs can help make your organization a better place for people to work—improving employee engagement, productivity, and retention. A diverse workforce brings together many different perspectives, skills, and […]