Science fiction writer William Gibson famously stated on NPR’s Fresh Air back in 1993, “The future is already here, it’s just not very evenly distributed.” It’s a quote that in many ways still holds true today, illustrating the divide between developed and developing countries, and even more generally between those in the know and those who don’t know squat about diddly. However, this knowledge gap has been slowly but surely dissipating, thanks in large part to the explosion of TED Talks into the mainstream conversation.

What started as a private highbrow salon almost 30 years ago, TED.com has been transformed into a global platform built under the premise of distributing “ideas worth spreading”. These ideas have culminated in over one billion viewings, and continues to expand into new circles and new mediums with TEDx, TED-ED and the TED Prize. 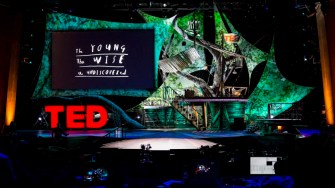 Yesterday marked the start of the annual conference held in Long Beach, California. The theme for TED2013 is “The Young. The Wise. The Undiscovered.” – with the TED team spending several months globetrotting around the world to bring together a diverse group of talent to the stage. The resulting lineup includes a 13-year-old Masai boy engineer, a 15-year-old medical pioneer, a Ghanaian undercover journalist as well as some more traditional keynote speakers (and rock stars) such as Bono, Peter Gabriel, Elon Musk, Stewart Brand, and Vint Cerf.

The big news from Day 1 was the announcement of of this year’s TED Prize winner. The grand sum of one million dollars for seed money was presented to Dr. Sugata Mitra of India. The renowned educator is famous for his “hole in the wall” experiment where he installed a computer in an Indian slum and documented how the young kids embraced the PC, figured out how to use it, and then recorded how the kids began teaching the other kids about the technology.

In his TED Talk in 2007 he asked, “what else can children teach themselves?” He has since been developing the concept he calls SOLEs (Self Organized Learning Environments). His approach embraces a modern view of education; one where facts and rote memorization are reserved for machines, leaving room for the kids to ask big questions and embark on intellectual journeys of free-form exploration and discovery. Sugata will use the TED Prize to launch a global initiative for his approach to self-directed learning.

Mitra said of the project, “My wish is to help design the future of learning by supporting children all over the world to tap into the innate sense of wonder and work together.” He continued, “Help me build the School in the Cloud, a learning lab in India, where children can embark on intellectual adventures by engaging and connecting with information and mentoring online.” 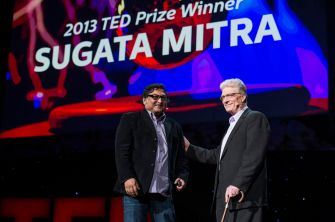 The school will be self-sustaining and managed by cloud technology. Mentorship will play an important part of the experience, and Mitra has just released a toolkit for anyone interested in trying his self-directed learning approach. How to Bring Self-Organized Learning Environments to Your Community is an online resource designed to help educators and parents support kids as they begin their educational journey.

This is the largest ever TED Prize – the tradition having been born in 2005 when Bono and his ONE Campaign received the inaugural award of $100,000. The increased prize money marks the increasing expansion of the TED brand, platform, and overall impact on the world. With TEDx Conferences now being held all over the world at increasing rates, and TED-ED videos expanding into the classroom, TED seems poised to overcome Gibson’s quote and distribute the future to the masses; by offering a diverse set of on-ramps for people to jump on board the activist train, the movement seeks to unite the planet around important conversation, so that together we may collectively design the future we all wish to see in the world.

What’s hell really like?
▸
4 min
—
with
Bishop Robert Barron
Up Next

Well, if the New York Times Magazine can write a headline like that about fiction in January, why can’t I borrow it for poetry in February? Anyway, it’s true: Joshua Mehigan’s […]