A new study suggests that men are, on average, better navigators than women.

The main reason? Men are more likely to take shortcuts.

In a new paper published in Memory & Cognition, researchers explain how they recruited about 140 participants, asked them to self-report their sense of direction and navigational strategies, and had them complete one of two experiments.

The first asked about 70 participants to familiarize themselves with the maze by following a path of red arrows for a few minutes, noting the unique objects they passed along the way. Then, over 24 trials, the participants were dropped off somewhere along the learned path and asked to navigate to one of the objects they had passed. Sometimes the shortest course to the object was the learned path, other times it was a shortcut. 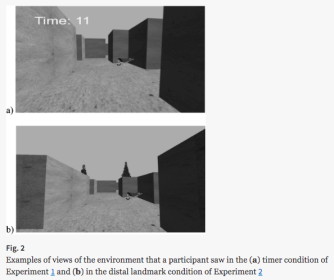 Men took significantly more shortcuts, while women were more likely to wander and stick to the learned route.

The second test was nearly identical, though researchers added distal landmarks, like trees and mountains in the background, to the virtual maze. Again, men took more shortcuts while women were more likely to wander, but this time women didn’t stick to the learned route significantly more than men. 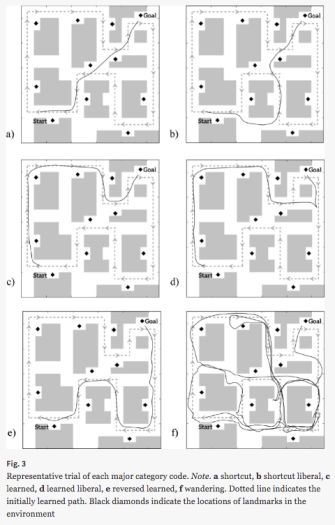 “As predicted from previous research, these experiments showed that men were more likely to take shortcuts and on average reached their goal location faster than women. In contrast, female participants were more likely to follow learned routes and wander,” said lead study author Alexander Boone of UC Santa Barbara Boone. “In both experiments, men were significantly more efficient than women, even after controlling for the effects of strategy.”

The findings echo past research on sex differences and spatial ability. The researchers write that men often perform better in tests that require “remaining oriented to compass directions in unfamiliar environments, keeping track of the starting point while taking a circuitous walk, and following navigation instructions that use cardinal directions and metric distances.”

But they also pointed out that these sex differences represent an average, and that some female participants completed the test more quickly than men.

“Overall, our research indicates that the sex difference in navigation efficiency is large, and is partly related to navigation strategy,” Boone said.

In future studies, the researchers said it’d be useful to examine navigational strategies and efficiency in real-world locations, given that some men might have had an advantage in the tests because they were more familiar with video games.

Related
Starts With A Bang
Ask Ethan: What are white holes, and do they really exist?
In General Relativity, white holes are just as mathematically plausible as black holes. Black holes are real; what about white holes?
Life
Strange life forms create an “alien” ecosystem in an abandoned uranium mine
Slimy biofilms made up of bacterial and eukaryotic life forms have taken over an abandoned, flooded uranium mine in Germany.
Hard Science
Earth has an eerie “sodium glow,” and astronomers use it to image stars
Air currents in our atmosphere limit the resolving power of giant telescopes, but computers and artificial stars can sharpen the blur.
Health
How saliva changes the flavor of food
“It’s a liquid, but it’s not just a liquid.”
High Culture
Why are flood myths so common in stories from ancient cultures around the world?
Could the prevalence of flood myths around the world tell us something about early human migration or even the way our brains work?
Up Next
Surprising Science
Life in orbit is better than you think. Ask Peggy Whitson.
Big Think speaks with the American who’s spent the most time in space, astronaut Peggy Whitson, looking back on what she learned during life in orbit.