In a new paper, scientists have envisioned a new power source straight out of Star Trek. While nuclear fusion reactors, which produce energy in the same way as the sun, are still not a viable reality, researchers from Tel Aviv University and the University of Chicago are proposing quark fusion.

The way we can produce quarks is through particle accelerators like the Large Hadron Collider in Switzerland, which can smash protons and neutrons to break them up into quarks.

What the researchers Marek Karliner and Jonathan Rosner, who wrote the paper,are saying in their analysis is that if these quarks were then recombined, they would release large amounts of energy. Specifically, the researchers calculate that quark fusion could produce as much as eight times the energy of nuclear fusion (which uses hydrogen atoms). 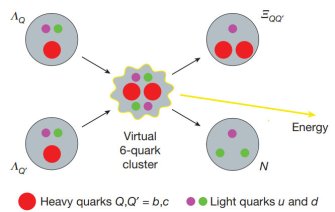 The only challenge to this amazing source of cheap energy – figuring out how to do it. Among the challenges is understanding how to produce the heavier quarks which are to be combined with lighter quarks from the proton and neutron collisions. The researchers are planning to test the theory first using the Large Hadron Collider.

Of note is that the researchers didn’t initially want to publish their theoretical findings, afraid of proposing this kind of massive energy release especially since hydrogen fusion is central to hydrogen bombs. They have subsequently calculated that a chain reaction necessary for such an explosion would be impossible using quarks as they exist for too short an amount of time.

You can check out the new paper “Quark-level analogue of nuclear fusion with doubly heavy baryons” here, in Nature magazine.

Related
Starts With A Bang
Ask Ethan: What are white holes, and do they really exist?
In General Relativity, white holes are just as mathematically plausible as black holes. Black holes are real; what about white holes?
Life
Strange life forms create an “alien” ecosystem in an abandoned uranium mine
Slimy biofilms made up of bacterial and eukaryotic life forms have taken over an abandoned, flooded uranium mine in Germany.
Hard Science
Earth has an eerie “sodium glow,” and astronomers use it to image stars
Air currents in our atmosphere limit the resolving power of giant telescopes, but computers and artificial stars can sharpen the blur.
Health
How saliva changes the flavor of food
“It’s a liquid, but it’s not just a liquid.”
High Culture
Why are flood myths so common in stories from ancient cultures around the world?
Could the prevalence of flood myths around the world tell us something about early human migration or even the way our brains work?
Up Next
Hard Science
The Idea of Creating a New Universe in the Lab Is No Joke
The idea may have started as a joke, but it’s getting more and more serious.