Stephen Hawking will never know if there really are multiple universes, but he’s left behind a hell of a parting shot: a test that could prove or disprove their existence. On March 4, a mere 10 days before he died, the theoretical physicist signed off on the final corrections for one last paper, “A Smooth Exit from Eternal Inflation.” It proposes a data-collection mission for a deep-space probe, and it lays out the math for discerning the telltale signs of a multiverse in its data. How thrilling would it be if Hawking’s final formula answers one of his most provocative questions?

The paper is still under review by a “leading journal,” according to The Times, and hasn’t been published yet. It was co-authored by theoretical physicist Thomas Hertog of KU Leuven University in Belgium. Work on the paper concluded at Hawking’s deathbed, says The Times.

Hawking first arrived at the idea of multiple universes—or the multiverse—back in 1983 with the “no-boundary” theory he developed with James Hartle. Uncomfortably for Hawking, the theory predicted an infinite number of Big Bangs occurring one after the other, with each expanding from a tiny point into a full-blown universe through the process of inflation. 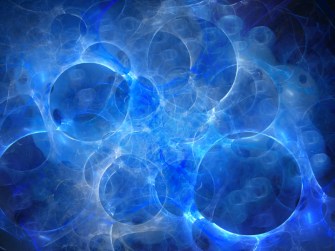 However, with us stuck in our universe, and other universes imperceptible to us from here, Hawking had long been frustrated by the inability to confirm or refute the multiverse.

The new paper was Hawking’s final attempt to address that experimentally. Says Hertog, “We wanted to transform the idea of a multiverse into a testable scientific framework.” Their paper asserts that evidence for multiple universes should be contained in background radiation from the beginning of time and that it should be measurable using the pair’s new equations once a deep-space probe has made certain measurements.

“The intriguing idea in Hawking’s paper is that the multiverse left its imprint on the background radiation permeating our universe and we could measure it with a detector on a spaceship,” Carlos Frenck of Durham University tells The Times. “These ideas offer the breathtaking prospect of finding evidence for the existence of other universes. This would profoundly change our perception of our place in the cosmos.” He adds that there would be only one logical name for such a probe: “The Hawking Cosmic Probe, of course.”

Leave it to Hawking to blow our minds one final, spectacular time.

Related
The Present
Radical idea: Redraw the U.S. map as a nation of city-states
While cities drive national economic growth, their political geography means they cannot effectively deal with inequality, poverty, and other socioeconomic problems.
The Learning Curve
Why do high IQ people stagnate in their careers? Emotional intelligence
Research suggests that emotional intelligence is more vital for success than IQ.
The Present
Even in the age of AI, some problems are just too difficult for computers
Computers are growing more powerful and more capable, but everything has limits
The Future
How the metaverse will revolutionize K-12 and higher education
Imagine going on a tour through the human circulatory system as a tiny cell. That is just one example of education in the metaverse.
Starts With A Bang
Ask Ethan: What are white holes, and do they really exist?
In General Relativity, white holes are just as mathematically plausible as black holes. Black holes are real; what about white holes?
Up Next
Politics & Current Affairs
Facebook’s stock drops 7% after whistleblower speaks on Cambridge Analytica scandal
A former employee of Cambridge Analytica has revealed new information on the harvesting of Facebook users’ data prior to the 2016 presidential election.