Australian researchers say they solved “one of the greatest mysteries of science” – how large complex animals first appeared on Earth. It was a key milestone that led to humans. The scientists found that the rise of algae was instrumental in triggering one of the most transformative ecological revolutions in the planet’s history.

The new study comes from the Australian National University and was based on examining ancient sedimentary rocks, gathered in central Australia. The lead researcher Associate Professor Jochen Brocks explained that the scientists crushed the rocks to extract molecules of ancient organisms.

“These molecules tell us that it really became interesting 650 million years ago. It was a revolution of ecosystems, it was the rise of algae,” said Brocks.

He set the stage for how algae had such an impact by describing an event called Snowball Earth which took place 700 million years ago. It resulted in Earth being completely frozen over for 50 million years. But once the ice started to melt, a tremendous amount of nutrients was released:

“The Earth was frozen over for 50 million years. Huge glaciers ground entire mountain ranges to powder that released nutrients, and when the snow melted during an extreme global heating event rivers washed torrents of nutrients into the ocean,” elaborated Brocks. 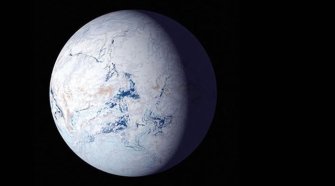 The rush of nutrients and the cooling of global temperatures created the right conditions for the growth and rapid propagation of algae. The ocean was no longer just full of bacteria, moving towards hosting more complex life forms. This set of an evolutionary chain reaction that resulted in you and me.

“These large and nutritious organisms at the base of the food web provided the burst of energy required for the evolution of complex ecosystems, where increasingly large and complex animals, including humans, could thrive on Earth,” proposed Brocks.

The research team’s co-lead Dr. Amber Jarrett, who found the ancient rocks that were dated to just after the Snowball Earth period, called their discovery “ground-breaking” —

“In these rocks we discovered striking signals of molecular fossils,” said Dr Jarrett. “We immediately knew that we had made a ground-breaking discovery that snowball Earth was directly involved in the evolution of large and complex life.”

You can read the published research in Nature magazine.

Check out also a video with the researchers describing their work here:

Google maps won’t guide you to Mars - but will your compass work in space?
▸
with
Michelle Thaller
Up Next
Neuropsych