Not too long ago, a major milestone in spaceflight took place. SpaceX, the private company with big dreams for manned spaceflight, launched a partly used rocket into orbit at a lower cost than building a brand new one. If that report doesn’t fill you with a sense of awe, wonder, and hope for the future of spaceflight, allow us to fix that right now.

The last major attempt at a reusable spacecraft was NASA’s Space Shuttle. However, the promised ultra-low cost of the space shuttle never materialized, as the costs of refurbishing the crafts between launches ending up eating up any potential savings.

While the true cost savings of a reusable Falcon 9 rocket are presently unknown, a SpaceX executive has proposed that future launches with reused boosters could have the sticker price reduced by a third. Not bad considering that would amount to twenty million dollars per launch.

But, why is this as important as we say it is?

There is currently a new space race going on, one that Big Think hasmentioned previously. While there is reason enough to be excited, the high costs of this space race are still a hindrance and reality check to the dreams of space exploration. Even something as simple as being able to reuse a portion of a spacecraft, and therefore lower the costs of operation, is a major step forward in the feasibility of other dreams.

Best case, the often seen idea of inexpensive commercial spaceflight to Earth’s orbit could soon become feasible, as innovation and competition drives down costs. Even if this was only to be a moderate success, space flight will soon become much more feasible for commercial operations.

And this could end up just being hype, the United Launch Alliance has previously investigated the feasibility of reusable rockets and found that the reductions to maximum payload outweighed the benefits of reduced launching prices. NASA has also declared that having reusable components was not a major concern in the planning of their new S.L.S rocket.

OK, so this is just step one?

Yes, but a big one. If future launches of the Falcon 9 support the feasibility of recycled rockets the price of orbital space flight is likely to take a tumble and the likelihood of SpaceX’s dreams of Martian colonies will increase. Elon Musk speaks for all of us when he said, “We just had an incredible day today.” 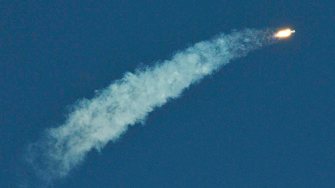 SpaceX’s Falcon 9 rocket lifts off from space launch complex 39A at Kennedy Space Center, Florida on March 30, 2017, with an SES communications satellite. SpaceX blasted off a recycled rocket for the first time on, using a booster that had previously flown cargo to the astronauts living at the International Space Station. (BRUCE WEAVER/AFP/Getty Images)

Is the Universe finite or infinite? Does it go on forever or loop back on itself? Here’s what would happen if you traveled forever.
Up Next
Culture & Religion

Spontaneous talk on surprise topics. Turkish-American writer Elif Batuman on truth in fiction, how language shapes us, and more.