A new study sheds light on what happens to your body if you get a tattoo. Scientists from Germany and the ESRF, the European Synchrotron in Grenoble, France, found evidence that elements from a tattoo’s ink, including toxic impurities, travel through the body as micro and nano particles, reaching the lymph nodes.

The study’s implications is that while little is known about what is in a tattoo’s ink, the potential impurities in the color mixture are cause for possible concern. Most tattoo inks contain not only organic pigments but preservatives and contaminants like chromium, nickel, manganese or cobalt.

Hiram Castillo, one of the authors of the study, explained the practical significance of their findings.

“When someone wants to get a tattoo, they are often very careful in choosing a parlour where they use sterile needles that haven´t been used previously. No one checks the chemical composition of the colours, but our study shows that maybe they should,” said Castillo.

Another ingredient is often titanium dioxide – a white pigment that can lead to delayed healing, skin elevation and itching in those who get white tattoos. The scientists followed the path of titanium dioxide once it gets in the tissue. Using X-ray fluorescence measurements, the research team traced titanium dioxide at micro and nano levels in the skin and the lymphatic environment. They found a range of particles up to several micrometres in size in the human skin while the smaller nano particles appeared in the lymph nodes. 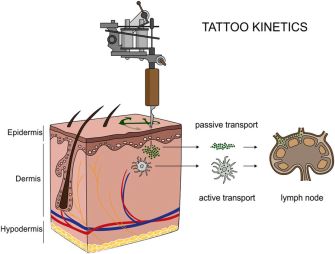 Translocation of tattoo particles from skin to lymph nodes. Upon injection of tattoo inks, particles can be either passively transported via blood and lymph fluids or phagocytized by immune cells and subsequently deposited in regional lymph nodes. After healing, particles are present in the dermis and in the sinusoids of the draining lymph nodes. The picture was drawn by the authors (i.e., C.S.).

The scientists suggest that the tattoo particles may lead to chronic enlargement of the lymph nodes over a lifelong exposure. The findings also indicate that there are bimolecular changes in the tissues around the tattoos that may be linked to inflammation and other harmful effects.

The next step for the teams is to study patients with negative effects from tattooing to see what properties of the pigments may be responsible.

You can read the new study here.

Hurricane Irma was so large and powerful that it swept large parts of the ocean up and out of the gulf of Mexico, allowing residents of Tampa, Florida, to stand […]