The Perseid meteor shower is at its peak—a stellar show that occurs every August and can be seen by anyone living in the Northern Hemisphere. But what if we didn’t have to wait till August or the next meteor shower–what if we could create our own?

In the future, we may be treated to a man-made shower of lights, skirting across our horizon, and I’m not talking about accidental satellite debris.

When we see a meteor skirt across the sky, we’re going through a comet’s dust cloud. The debris from this cloud is entering our atmosphere at break-neck speeds and burning up.

[Want to know more about what causes meteor showers?]

Japanese company ALE says it’s working on creating the future of entertainment in space as part of it’s project Sky Canvas. Yup, artificial “meteor” showers. The company says it has plans to release a satellite capable of mimicking these stellar shows into orbit within the next two years.

This is how it will work: The satellite will come to rest at an orbit 314 miles above Earth. When it’s ready to initiate a shower, the satellite will release tiny metal spheres (no bigger than a blueberry) into the upper atmosphere. This size is still significantly bigger than the comet dust that typically enters our atmosphere, which is no bigger than a grain of sand. ALE says this is intentional, bigger debris released will cause a brighter, more long-lasting burn. 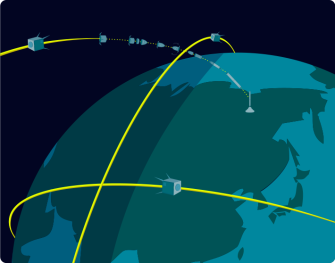 These metal balls won’t move at same speeds as the comet dust, which enters our atmosphere at 158,000 miles per hour. Comparatively, they’ll coast into it at 17,400 miles per hour. Still, the sphere will burn to a crisp, creating that meteor shower-like experience for anyone who’s watching.

What’s more, the company can choose the color of the shower depending on the metals used.

If someone places an order for a celestial show, the company says, “At ground level, this can be observed in an extremely wide area, with a radius of approximately 100km, or a diameter of approximately 200km.” However, it may not be in everyone’s budget. AFP reported back in 2015 that each sphere costs about $8,100.

ALE says it plans to launch its first satellite in 2018. Which part of the world will be treated to the first celestial fireworks?

Meaningful pictures are assembled from meaningless noise.
Up Next
Starts With A Bang

Screenshot from the Alisyn Camerota / Newt Gingrich interview on CNN. Full interview available here: https://www.facebook.com/AlisynCamerota/videos/10153845308112547/.Using incomplete facts to spin a false narrative and mislead the public is the modus […]