Pretty soon, we’ll no longer be able to base computers on electronics. We can only make the microchip so small. At some point, the silicon chip will grow so thin that the amount of power used to perform calculations will melt it. Other models have been in the works, quantum computing for example. But that’s difficult and the process it’s built upon, not well understood.

Another option is light-based computing, which would be extremely fast, more energy efficient, and could store much more information than traditional ones. One of the reasons it’s so much better is, such a system produces little to no heat. Optical computing may also be well suited for deep learning, an essential part of the most recent developments in A.I. Since deep learning takes tremendous amounts of computation, the dramatic increase in computing power could allow scientists to take A.I. to a whole other level.

Though it sounds futuristic, the concept of optical computers is more than 50 years old. In the 1960s, Bell Labs and other tech giants sunk millions of dollars into trying to bring light-based computing to fruition, with little to show for it. What they sought is a computing version of the Holy Grail, the light equivalent to the transistor.

A normal computer today relies on carefully orchestrated electronic circuits. They switch one another on or off as required. While optical computing relies on beams of light interacting. This would take place in a photonic computer chip, using beam splitters to guide the light along. 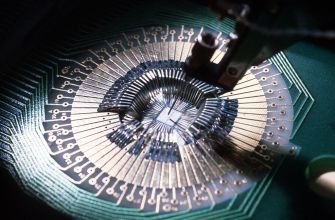 The microchip can only grow so small. Soon, a totally new system must replace it. Credit: CSIRO, Wikimedia Commons

The trouble is, photons operate very differently from electrons. While electrons fight resistance, photons don’t. Electrons when they meet naturally interact. Photons on the other hand, don’t influence each other much. These issues must be overcome before we can supplant the microchip with a photonic one. But in a way we already use such techniques. We already transfer internet connection via fiber optic cables. And yet electronics are required to process the transmission, once it arrives at your computer.

Now, scientists at Imperial College London have announced a development. They’ve figured out a way to get rid of the electronic piece, and do it all with pure light. Their results were published in the journal Science. The heart of their breakthrough lies in what’s known as nonlinear optics. This is passing light through optical crystals to cause certain effects. Such crystals allow photons to interact with one another.

Ever use a green laser pointer? This is a prime example. Since a green laser is hard to make in a direct way, within the device, the laser passes through a crystal. Inside of it, every two photons merge. Each union results in a single photon with twice the energy, allowing the laser to turn green. Usually, the effect gained by nonlinear optics is weak. What’s been done in the past, is to use a lot of material and grow the effect, until it becomes significant. To gain a substantial effect however, it must be performed over a distance too long to incorporate into computers. 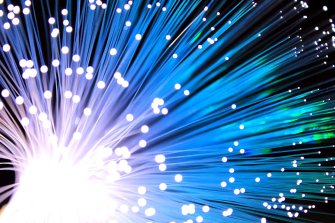 The internet already travels over fiber optic cables. How to get it to operate inside our computers is the tricky part. Credit: Chaitawat, Pixababy.

Using nonlinear optics, Imperial College scientists were able to decrease the distance the light needed to travel by 10,000 times. So what would’ve needed centimeters of material now only requires micrometers of it. Note that one micrometer equals one millionth of a meter. This is the exact scale needed to allow optical computers to become viable. So how did they do it?

They squeezed the light into a very small passageway, only about 25 nanometers wide. By doing so, the light became more intense as the photons within it were forced to merge over the short distance. The channel was also coated with a polymer once earmarked for use in solar panels. The most exciting part, this system can be integrated into current computer models.

Researchers also cured another problem with nonlinear optics. Since different colored light passes through materials at different speeds, they can become “out of step,” with one another. Here, with the light traveling just a short distance, there’s no time for disharmony.

Want to know more about the computers of the future? Click here:

Related
Neuropsych
Daily caffeine intake temporarily alters your brain structure
Compared to people who took a placebo, the brains of those who took caffeine pills had a temporarily smaller gray matter volume.
Thinking
Why you should laugh at yourself, according to Seneca and Nietzsche
“It is more human to laugh at life than to lament it.”
Hard Science
The violence of the Tonga eruption is a wake-up call to watch other submarine volcanoes
Out of sight, but not out of mind.
The Present
How circular economics can make us happier and less stressed
Entrenched business wisdom says that community-led economic systems are pure fantasy. Douglas Rushkoff disagrees.
The Learning Curve
The art of asking the right questions
The right questions are those sparked from the joy of discovery.
Up Next
The Power of Performance Management Tools
Strong performance has an enormous impact on an organization’s viability — it boils down to a team of highly effective, dedicated workers who can complete tasks quickly and efficiently.