On September 14, when scientists picked up the first direct evidence of gravitational waves thanks to the echoes of two black holes colliding 1.3 billion years ago, it was a Very Big Deal, as we all know. They’d been looking for the since Einstein predicted them as part of general relativity in 1916, but here at last was proof. An epochal moment. 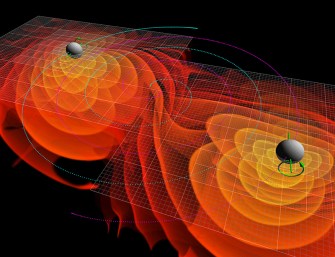 What’s been less-reported, though, is that just half a second after Laser Interferometer Gravitational-Wave Observatory (LIGO) scientists in Washington and Louisiana detected the gravitational wave signals, NASA’s orbiting Fermi Gamma-ray Space Telescopepicked up a short, faint signal from the same area in space: Gamma rays likely emanating from the same black-hole collision. If this is confirmed, it’s an earth-shaking surprise.

Astronomers believe that when two black holes combine, they do so “cleanly,” without producing any light. If these are indeed gamma rays, that has to be wrong. Creating light requires a gas of some sort, and anything like that should have been swallowed up before the black holes even met, or at least prevailing theory goes. Or went.

There seem to be only two possible explanations. Either the gamma signal was just a coincidence, and that’s not likely —NASA says there’s just a .2% chance of that. Or black holes do emit gamma rays, which means that astronomers have some serious re-thinking to do about black holes’ behavior.

Astronomers’ consolation prize for having a part of black-hole theory possibly blown right out of the sky is that it’s easier to figure out where the big collision took place with three data points than it was with two. Adding the location of the gamma signal has reduced the arc in which scientists think it occurred, from 600 square degrees to 200.

The Biggest Problem With The Expanding Universe

Image credit: NASA / WMAP science team.And why it might spell trouble for dark energy as we know it.“That’s all regular matter, just five percent. A quarter is “dark matter,” which is […]