A conversation around chocolate started in a group that I knew well. Each member told me how big a fan of chocolate they were, how happy it made them. I get it, I replied—me too. And we left it at that.

Until the following week, when I arrive with a plastic bag filled with raw cacao beans. Cruel trick, sure, but I was genuinely curious: Did they love chocolate or sugar? By the looks on their faces, the answer was clear. It reminded me of the Beastie Boys line: “I like my sugar with coffee and cream.”

This arrangement has worked out for me and my wife, however. We always have a few bars at home, one at least 90 percent cacao, something more flavorful for her. Bitterness is an acquired taste, but I stopped eating lower percentage bars for the same reason I quit putting honey in my tea: I want to taste the food, not the sweetener. (To be fair, my wife has a much broader range of culinary loves than myself; she’ll leave my 100 percent bars alone, though.) 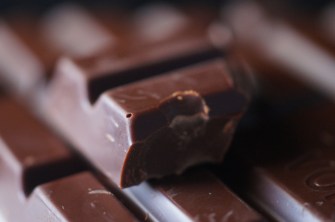 Anything under 70 percent cacao is candy, writes Derek Beres. This is 75% dark chocolate. Photo: Lee McCoy/Flickr

The healthiness of chocolate has long been debated. If a bar has 50 grams of sugar you have to weigh any benefits against the detrimental qualities of the sweetener. Chocolate does indeed have positive health qualities, but you have to go dark if you want to attain them.

Last year researchers in Italy discovered that cocoa flavanols exhibit neuroprotective effects. Volunteers experienced enhancements in their working memory as well as improved visual information processing, which the researchers argue could help stave off dementia and other diseases of cognitive decline as we age. Interestingly, for younger participants, the cognitive tests had to be highly demanding to witness benefits, though that tailed off at the upper end of the age range.

The researchers, who said they eat dark chocolate every day, did warn against chemical compounds in the cacao plant, such as caffeine and theobromine, as well as sugar and milk additives. The increased caloric content of bars with additives is also a concern.

Another Italian, Dr Rossella Di Stefano, a cardiologist the University of Pisa, also gives a thumbs up to chocolate. Only this time it stems from a study conducted by the European Society of Cardiology that found dark chocolate enhanced with olive oil “is associated with an improved cardiovascular risk profile.”

Volunteers, all of whom had at least three cardiovascular risk factors (such as smoking and hypertension), were given 40 grams of dark chocolate daily for 28 days. The chocolate contained either 10 percent olive oil or 2.5 percent Panaia red apple. The olive oil group experienced significantly higher endothelial progenitor cell levels, which is critical for vascular repair and endothelial function, as well as decreased levels of carnitine and hippurate. Their HDL cholesterol levels were also higher and blood pressure was lower.

This isn’t the first study to link heart health and chocolate. In 2014, research from the Netherlands found that dark chocolate restores flexibility to arteries and prevents white blood cells from sticking to the walls of blood vessels, both factors that play a significant role in atherosclerosis.

In 2015, researchers found that high-cacao bars improve attention, which is why one of the researchers eats dark chocolate every afternoon—to help with his midday slump. As psychological sciences professor Larry Stevens puts it:

“Chocolate is indeed a stimulant and it activates the brain in a really special way. It can increase brain characteristics of attention, and it also significantly affects blood pressure levels.”

With all of the talk around the microbiome today, in 2014 researchers at the American Chemical Society realized stomach microbes ferment bacteria in chocolate to produce anti-inflammatory, heart-healthy compounds. The team also found that these compounds help prevent strokes.

Research published in the Journal of Agricultural & Food Chemistry states that beyond improved cognition, lower blood pressure, and appetite suppression, ingredients in chocolate might help prevent obesity and type 2 diabetes. Oligomeric procyanidins helped curb weight in mice and improved glucose tolerance, which could play a role in treating diabetics. 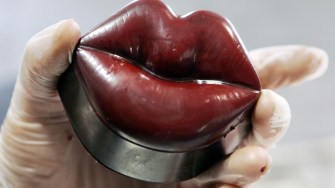 A dark chocolate pair of lips is made for Valentine’s Day at Jacques Torres Chocolate in New York. (Photo: Stan Honda/AFP/Getty Images)

Not that all of the news is good. Our growing love of “superfoods” in trendy stores and cafes has resulted in cacao being aggressively promoted by “wellness” companies, resulting in unprecedented levels of deforestation, according to research published last year by Lehigh University. Evidence of child slave labor and human trafficking has also been uncovered thanks to the cacao trade.

As it goes, developed nations enjoy the benefits of chocolate while it’s being produced by underdeveloped countries—roughly 3 percent of the cost of the bar goes to farmers in many of these regions. Last year the World Cocoa Foundation launched an initiative to help end deforestation caused by the West’s increased demand for cacao beans.

It’s good to remain wary of the big players. There are many smaller chocolate companies that engage in fair trade practice that source their beans from farmers they know and pay competitive prices. You might have to search beyond major grocery chains to find them, but from both an environmental and flavor perspective you won’t be disappointed.

What percentage of cacao is best? There is no definitive answer, but it’s pretty easy: the higher the content, the less sugar and milk products, the healthier it is. Anything under 70 percent is candy. Start with 70 and work your way up to 85. By the time you hit 90, you’ll never look back, and you can be sure you’re getting the bulk of the benefits.

Related
Strange Maps
Dutch government releases a genuine treasure map from WWII, sparking a hunt for the loot
X marks the spot. The Dutch town of Ommeren has been swamped by detectorists armed with shovels looking for $20-million treasure.
Thinking
Creative wisdom from Rick Rubin: embrace your inner gatekeeper
Unlock the full potential of your creativity with “holistic detachment.” This is the way of the editor.
If money doesn’t buy happiness, you’re spending it wrong
These money experts say you can buy happiness. There are some red flags to look out for, though.
▸
7 min
—
with
Lindsay Bryan-Podvin
Starts With A Bang
The path forward for astronomers and native Hawaiians
A history of injustice and the greatest natural location for ground-based telescopes have long been at odds. Here’s how the healing begins.
Thinking
“Give a f***, actually”: The surprising benefits of being grateful for things you dislike
Radical Emotional Acceptance calls on you to celebrate all of life’s emotions — even the negative ones.
Up Next
Health
Texas has its first legal medical marijuana transaction
The first medicinal marijuana patient in Texas uses it to treat severe epilepsy. And although 10 companies are allowed to grow marijuana within Texas state borders, the substance itself is still illegal.