You may not have heard, but agriculture is about to undergo a truly organic revolution. It’s a kind of agriculture that has a natural basis, which mother nature has already improved over millions of years.

Humans are rediscovering what comes naturally to plants at a pivotal time in our history. Populations are on the rise, land is at a premium, and we are facing a major shift in our climate. This has led many researchers to ask, how are farmers going to feed everyone? David Perry, CEO of the startup Indigo Agriculture, says there has to be a fundamental change in the way we farm. He believes microbes are the answer.

It’s only in the last few years that humans have begun to understand how deeply microbes impact our health and wellbeing. Some studies even indicate that the microbes in our gut could determine whether we’re fat or thin or even dictate our mood. We can’t see them, but life on our planet is dependent on this vast community of microbes. They live on us, within us, and all around us. 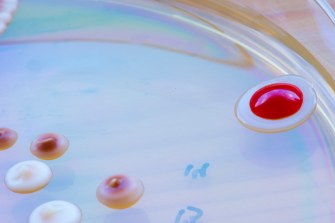 When humans first began farming, we didn’t realize such an important evolutionary bond had developed between microbes and plants. Researchers began to wonder if, just like in humans, microbes were tinkering with biology? After all, what benefits the host will benefit the microbe. Indigo’s CTO Geoff von Maltzahn said, “What if the microbes inside of plants over millions of years have been switching every light-switch inside of the plant’s physiology to try to overall improve the health and survival of the host?” Protections against heat stress, cold stress, and insects may not be dependent on just the plant’s biology, but its microbiome, as well.

“Microbes support plant health by increasing the availability of nutrients, enhancing plant root growth, neutralizing toxic compounds in the soil, making plants more resistant to disease, heat, flooding, and drought, and deterring pathogens and predators,” twenty-six experts from the American Academy of Microbiology wrote in a report called, How Microbes Can Help Feed the World. These microbes are like “probiotics for plants.”

“Multiple strains of wheat, corn, rice, and other crops have been planted around the world in environments where the local microbial communities differ from those where the plants originated, and where conditions are such that the plant might need new microbial partners to grow best,” the experts write.

So, instead, we compensated for this unknown loss through the use of irrigation, genetic engineering, and fertilizers and pesticides. But scientists believe we can enhance crop yields beyond what these techniques have been able to provide if we properly utilize these microbial communities.

Indigo has kept a lot of its work under lock and key, but Perry says they’re planning to make their research public sometime this year. However, they did show examples of how these microbes have enhanced a plant’s resilience under stressful conditions. In one example, Indigo showed how microbes might protect soy plants in a drought. 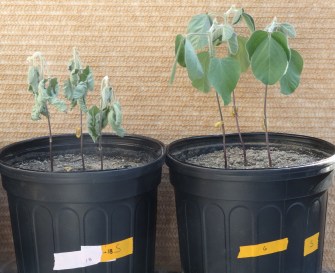 A lead microbe in Indigo’s collection confers drought resistance in soy, leading to a yield increase under drought conditions in the greenhouse. Left: untreated controls. Right: treated with Indigo strain.

What many environmental groups may want to know is whether these microbes limit or even eliminate the use of chemical fertilizers and pesticides altogether. For now, Perry isn’t sure, but he believes in time that it’s possible. “[S]cience has barely scratched the surface of these fundamental biological partnerships,” the experts from the American Academy of Microbiology wrote.

Other agricultural businesses, such as Monsanto and DuPont, are also researching these strains of microbes hoping to strike the right balance with their own crop tests. But how do scientist go about finding and combining these microbes to sustain these plants?

“If you just look at a field of corn there’s more microbes in that field than there are stars in the galaxy,” Geoff von Maltzahn said, giving me an idea of the scope of this work. “There’s a whole world of plants [which have been] a kind of petri dish of experiments that have already been happening.”

The process von Maltzahn described to me sounded a lot like a high-tech version of sifting for gold. It’s part  science and luck. There’s no way humans could sift through all the microbes gathered to find the most promising ones within their lifetime. As part of its extensive R&D efforts, Indigo has already identified and sequenced 40,000 plant microbes, filed over 150 patents, and collected over 36,000 samples from more than 700 plant species around the world.

What excites Perry is the potential future these microbes bring. “If we’re successful … if this approach is successful then we have the potential of enabling ourselves to feed the planet, and do so in a much more healthy and sustainable way than we currently do. And while doing that increase the profitability of farmers and sustainability of farms. We’re motivated by all of that.”

“There’s a very high probability that we’ll look back many decades from now and think, ‘We used to spray chemistries on hundreds of millions of acres of agriculture,’” says von Maltzahn. “’Wasn’t that a little bit nuts?’”

Talking to yourself seems to yield real benefits, from boosts in cognitive performance to improved emotional regulation.
Up Next
Surprising Science

You Lose Consciousness Every Minute of Every Day Suggests New Study

There are continuous gaps in consciousness when information is processed and you lose a sense of time says new research.