Darwin first noticed this not among the unique species of the Galapagos but in the common pigeon along the Thames and how much it differed from the fancier varieties Londoners kept as pets. Those beautiful, compliant ceremonial doves? They’re actually just white pigeons. He likened the differences to the kept bird’s better diet, comfier living conditions, and its ability to interbreed with other domesticated birds, leading to hybridization. Humans and animals entirely similar in the respect that each is shaped by the environmental circumstances thrust upon them. 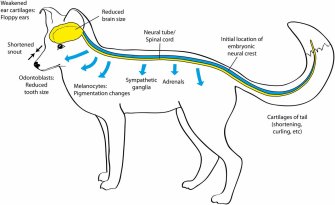 Researchers could then compare domestication genes with those found in the genomes of an animal’s wild counterpart. Surprisingly, the genetic changes that caused domestication were the same across all mammalian species, whether it be from wolves to dogs, European bison to cattle, or Neanderthals to humans. The genetic changes that drove these transitions were identical. 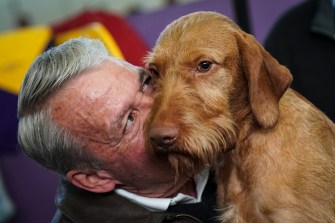 Related
Life
Scientists use CRISPR to insert an alligator gene into a catfish
Disease kills off 40% of farmed catfish. This gene protects them.
Neuropsych
How you breathe affects your brain
Your breathing rhythm influences a wide range of behaviors, cognition, and emotion.
Health
What happens when regular porn watchers abstain for a week?
Researchers watched for signs of withdrawal — but didn’t find any.
Neuropsych
Daily caffeine intake temporarily alters your brain structure
Compared to people who took a placebo, the brains of those who took caffeine pills had a temporarily smaller gray matter volume.
Thinking
Why you should laugh at yourself, according to Seneca and Nietzsche
“It is more human to laugh at life than to lament it.”
Up Next
Technology & Innovation
4G WiFi on the Moon? It’s coming as soon as next year
“Earth to lunar surface… my, you’re looking very high definition today!”