If you always felt that the world’s against you with its unreasonably early start times, there’s a new study that says just that. Researchers found that the biological clocks of students are often at odds with class schedules, resulting in worse academic performance.

By tracking two years worth of daily online activity for around 15,000 college students from Northeastern Illinois University,who made 3.4 million logins into college servers, the scientists were able to sort students into “night owls,” “daytimes finches,” and “morning larks.” These groupings were based on the activities of the students on their days off from school. Having established such divisions, the researchers correlated the times their classes started with the grades they received.

What the study revealed is that whenever the circadian rhythms of the students were out of alignment with the start times of their classes, they got worse grades. An example of this would be night owls taking classes in the morning. The condition that precipitates this outcome is “social jet lag” (SJL) which occurs when the times of peak alertness do not match the demands of school, everyday life or work.

The study was co-authored by Benjamin L. Smarr, a postdoctoral student from UC Berkeley, and Aaron Schirmer, an associate professor of biology at Northeastern Illinois University.

“We found that the majority of students were being jet-lagged by their class times, which correlated very strongly with decreased academic performance,” said Smarr. 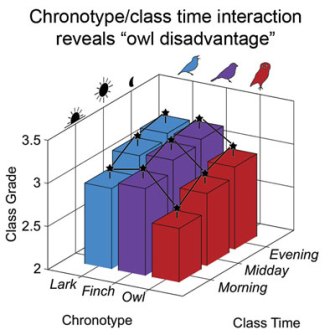 The chart shows that owls have a grade disadvantage at different times of the day. Credit: Benjamin Smarr.

Night owls were found to be at a particular disadvantage due to the early class times. And what’s more – the owls seem to be chronically jet-lagged and unable to do their best at any point of the day. Larks and finches also had their issues, not doing as well in classes that start later.

On the other hand, if there’s a choice in the matter, a student may use this knowledge to devise a schedule that works best for them. Those who were more in sync with their class times had higher GPAs.

“Our research indicates that if a student can structure a consistent schedule in which class days resemble non-class days, they are more likely to achieve academic success,” explained professor Schirmer.

Another way to look at the study is to conclude that there is no solution that would work for every person as people have different biological clocks. As such, the report urges educators to take this issue into account when creating class schedules.

And in a statement that can surely go up on the wall of many a student trying not to go to bed when their parents tell them, Starr said that “rather than admonish late students to go to bed earlier, in conflict with their biological rhythms, we should work to individualize education so that learning and classes are structured to take advantage of knowing what time of day a given student will be most capable of learning.”

You can read the new study in Scientific Reports.

Related
13.8
What kind of intelligence is artificial intelligence?
The initial goal of AI was to create machines that think like humans. But that is not what happened at all.
The Present
What’s effective altruism? A philosopher explains
Some effective altruists “earn to give” — they make as much money as they can and then donate most of it to charities.
Sponsored
How to avoid family fights about money
No family is immune to money conflicts, no matter how much they love each other. Here’s what to look out for.
L&D strategy
Best practices for a needs analysis [Templates included]
Conducting a thorough needs analysis requires care, curiosity, and open-mindedness.
Neuropsych
Memory and the benefits of forgetting
Forgetfulness isn’t always a “glitch” in our memories; it can be a tool to help us make sense of the present and plan for the future.
Up Next
Starts With A Bang
Ask Ethan: If Dark Matter Is Everywhere, Why Haven’t We Detected It In Our Solar System?
It’s the first, most naive question you might think to ask. The solution is a lot more complicated than you imagine.According to a large amount of evidence, the overwhelming majority of […]