After SpaceX launched its powerful triple-booster FalconHeavy, all eyes were on Starman, the mannequin “ driving” Elon Musk’s personal Tesla Roadster to toward Mars. It was a striking sight in so many ways, for its ambition and for the haunting vision of that solitary figure leaving us behind. What wasn’t well-known at the time, though, was that Starman wasn’t the Teslas’s only cargo: Also stashed in there were two tiny, data-packed discs that held the entire Foundation sci-fi trilogy written by Isaac Asimov. What these discs were and why they were there is jaw-dropping.

Each disk is an “Arch™” — pronounced “ark,” short for “archive” — from the Arch Mission Foundation, a “non-profit corporation designed to continuously preserve and disseminate humanity’s most important knowledge across time and space.”

The Asimov opus is the first literature in envisioned free-floating libraries of human knowledge — others are planned for the orbits of the sun and Mars, as well as one on the surface of the moon. The Mission says, “The Arch Libraries are primarily designed for humans, both in the near future and the distant future. There is also a slight, but non-zero, probability that the Arch Libraries might be useful to non-human intelligent lifeforms in the distant future.”

Onboard the FalconHeavy were two Arch discs, Arch 1.1 and Arch 1.2, from a set of five existing discs made with cutting-edge storage technology. They have an absolutely massive capacity and an amazing life expectancy. Arch 1.1 and 1.2 can each hold up to 360 terabytes of data, and remain readable for up to 13.8 billion years, even in the harsh environment in space — the discs can withstand temperatures up to 1,000°C.

Peter Kazansky, who developed the technology at the Optoelectronics Research Centre of the University of Southampton, says, “It is thrilling to think that we have created the technology to preserve documents and information and store it in space for future generations. This technology can secure the last evidence of our civilisation: all we’ve learnt will not be forgotten.”

The discs are made of so-called “Superman memory crystal.” It’s glass with three layers of nanostructured dots, or “nanodots,” etched 5 μm (micrometers) apart in quartz using femtosecond laser writing, a process that writes data with very intense, very short laser pulses. The process is referred to as “5D data storage,” those being the three dimensions of each nanodot’s location on the disk, plus size and orientation.

These Arch discs may be just the beginning. The Arch Mission and its partners are currently using, developing, or testing:

The Arch Mission believes that within 10 years, they’ll be able to store petabytes of data on each disc.

As impressive as the Arch discs are technologically, the planned Arch libraries are mind-boggling.

The Arch Mission sees these far-flung repositories of human knowledge providing a host of benefits to future humans. Right now they believe the project can get everyone involved in, and excited about, the compiling of all human knowledge. In the near future they see the portable, connected libraries as being able to “back up and deliver enormous archives of knowledge (such as all the content we want, even the entire Internet) to human settlements and colonies in space and on other planetary bodies around our solar system over the next several hundred to few thousand years.” If, in the distant future, we manage to wipe ourselves out, any survivors will have the information they need to rebuild civilization. Assuming they have a means of accessing the Arch libraries, of course.

For any non-humans coming across our libraries, the Mission is designing their physical appearance to make their contents clear to alien minds, including decoding instructions in the center of each disc. 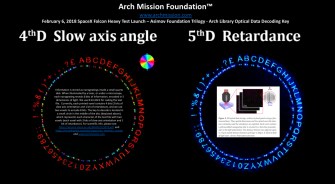 There are a lot of issues to consider regarding the Arch Mission Foundation’s plans, and you’ll probably find browsing their website thought-provoking. They operate on the assumption that telling the universe about us is a good idea, but that’s just one thing to think about, and they’re quite aware of some of the galaxy-scaled philosophical issues involved.

Related
Life
Strange life forms create an “alien” ecosystem in an abandoned uranium mine
Slimy biofilms made up of bacterial and eukaryotic life forms have taken over an abandoned, flooded uranium mine in Germany.
Hard Science
Earth has an eerie “sodium glow,” and astronomers use it to image stars
Air currents in our atmosphere limit the resolving power of giant telescopes, but computers and artificial stars can sharpen the blur.
Health
How saliva changes the flavor of food
“It’s a liquid, but it’s not just a liquid.”
High Culture
Why are flood myths so common in stories from ancient cultures around the world?
Could the prevalence of flood myths around the world tell us something about early human migration or even the way our brains work?
The Future
Space travel will radically change human psychology and spirituality
We are traveling in a realm that once exclusively belonged to the gods. Space travel will force humanity to rethink everything.
Up Next
Health
Study links 4/20 to an increase in deadly car crashes
U.S. drivers faced a 12% greater risk of dying in a car crash on April 20 over the past 25 years. The likely explanation? High drivers.