The idea is called “conformal cyclic cosmology” (CCC), and what it asserts is that, rather than starting from a big bang, the universe continually expands and contracts, each time leaving behind tiny bits of electromagnetic radiation that remain as the process occurs over and over. The late Stephen Hawking predicted tiny dots of radiation, which others call ‘Hawking points’, left over from this cycle. Now, the scientists behind CCC theory say they can see possible examples of ‘Hawking radiation‘ in a map created by a radio telescope at the South Pole. They’ve dubbed them ‘Hawking holes’. “I think,” says team leader, Oxford’s Roger Penrose, “he would have been delighted to see the actual effect he predicted in an observation.”

In 2014, the BICEP2 South Pole telescope captured images in which there were swirls of polarized light in the cosmic microwave background (CMB). The BICEP2 team interpreted these swirls as artifacts of gravitational waves from the expansion occurring after the Big Bang, and say that subsequent data from the Planck observatory suggests that these ‘B-modes‘ are interstellar dust. 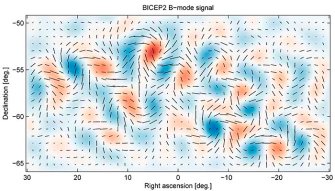 Penrose and his colleagues see something else. They see signs of the radioactive rings that CCC predicts would be left behind after a previous universe shrank back to a Hawking point, as verified by thousands of CCC computer models they’ve run. According to Penrose, our measurements of the CMB go back no further than 380,000 years, and so we can’t see the tiny points themselves, but just the radioactive rings they’ve left behind.

In particular, they’re intrigued by certain areas in the BICEP2 map that show rings of polarized light—this indicates to them a vast temperature differential between the ring’s inner and outer boundaries. 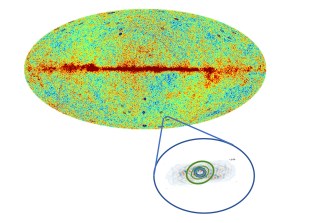 Some say the map on which Penrose is basing his conclusions isn’t really accurate enough to take so seriously. The BICEP2 team hasn’t yet released that data from which the map was generated, and there’s a certain amount of rounding-off in the map Penrose is working from. Huge areas of space are represented by single pixels in the image, so there’s insufficient detail present in any one pixel to make it that useful for serious analysis. The raw data, when released, will be more granular in the information it presents.

Even so, Penrose’s faith in the image he has is based on his teams’ models that predict what the map seems to show. His colleague Daniel An says, “That means they were probably caused not by chance, but by some physical phenomenon.” The team’s analysis of the corresponding Planck data verifies that the swirls aren’t just visual artifacts, but that there is really at least something there. Something consistent with their 4,000 CCC simulations.

If conformal cyclic cosmology is correct, the Big Bang theory isn’t. Of course, before such an extraordinary shift in perspective occurs, equally strong evidence for CCC will be necessary. Still, Penrose’s idea—though preliminary, pending receipt of the BICEP2 data—is tantalizing. “What we claim we’re seeing,” he says, “is the final remnant after a black hole has evaporated away in the previous eon.” Make that the previous universe.

When we are more focused on the good things we enjoy in life, we have more to live for.
Up Next
Strange Maps