Han Solo’s Millennium Falcon is a real spaceship. Han can take off at a moment’s notice and escape from pursuers into space. And when he reaches his destination he simply flies right down through the planet’s atmosphere and can land on almost any patch of ground. After a quick refueling he can do it all again. Alas, this is the stuff of George Lucas’s imagination alone.

The Space Shuttle was a valiant but failed attempt to build a reusable launch vehicle.
Photo credit: NASA.

As this month’s issue of Thruster focuses on Technology, or the 4th of the “NSG 4-Screens,” it is appropriate to focus on the most important technological challenge for the NSG 100 LargeCaps: reusability.

The problem is the puny power of the chemical rocket. A rocket engine provides thrust by hurling propellant out of its nozzle at high speed. The propellant speed largely determines the efficiency of a rocket, i.e. how long it can maintain a given thrust with a given amount of fuel. The problem with chemical propellants like the liquid hydrogen/liquid oxygen used by the Boeing Delta 4 or the kerosene/liquid oxygen used by the SpaceX Falcon 9, is that the propellant speed maxes out at such a low level the rocket needs to consist mostly of fuel to achieve orbit. With even the most efficient chemical rockets, our single-stage-to-orbit vehicle (a.k.a. the Millennium Falcon) must consist of at least 90% fuel at takeoff! All of the structures, tanks, electronics, thermal protection, microgravity research payloads, small satellites, space tourists (whether Wookie, Katy Perry or you), must all fit within just 10% or less of the total takeoff mass. (Please see “LargeCap Review” in the March 2012 issue of Thruster.)

Splitting the job into two or more stages allows one to work with a somewhat more reasonable 20% for non-fuel mass per stage. The mass of the payload, such as an SES, Iridium, or Intelsat satellite, is maximized if mass for everything else is minimized. This is why “the Space Age” of the 1950s started with expendable launch vehicles (ELVs). ELVs don’t “waste” mass on things like fuel to return the rocket home or a thermal shield to protect it as it slows down in the atmosphere.

While fuel dominates the mass at lift-off, it contributes only a tiny fraction to the cost of the launch. What many do not realize is that propellant costs are typically less than 1% of the cost of a launch to orbit. All that non-fuel mass that falls into the sea is where most of the transport costs go. As Elon Musk of SpaceX often points out, the cost of flying from New York to London would also be astronomically expensive if the 747 were “thrown away” after reaching Heathrow. If space vehicles could be fully reused and quickly prepared for a new flight just like airliners, the cost of getting to space could – as Elon and other leaders in NewSpace believe – plummet by as much as a factor of 100. (Please see “Leaders of NewSpace” in this issue of Thruster.) With those reduced costs, the markets outlined in the “NSG 8-Verticals” such as mining asteroids, microgravity medical discoveries, and affordable space tourism for the middle class become not just viable but inevitable.

There are no laws of physics that prevent development of such reusable launch vehicles (RLV) but, as indicated earlier by the limits on a rocket’s non-fuel mass, there are high engineering hurdles that will require considerable capital to overcome. Thankfully, we’re now seeing NewSpace pioneers like SpaceX and Blue Origin led by Jeff Bezos – two of the leading NSG 100 LargeCap companies – committed to the development of orbital RLVs.

RLVs have been a goal since the 1960s but none have gone to orbit… and most have not even launched off the drawing board. The Space Shuttle was originally designed to be a two-stage RLV in which the first stage (derived from the Saturn V rocket) would fly back to the launch site while the orbiter went on to orbit. This plan, however, was deemed too expensive by the Nixon administration and Congress, and NASA was reportedly told to build the Shuttle for half as much money. At the same time, NASA was told by the Defense Department that in order to get its support for the program, the Shuttle would need to be big enough for the largest spy satellites, and be able to return from orbit to a wide array of landing sites. These requirements demanded a big orbiter with large wings. Thus NASA was told to do a lot more with a lot less money. The result was a highly-compromised hybrid system in which the flyback first stage was replaced with a +$50Mln external tank that was thrown away and with solid rocket boosters that were towed back after falling into the ocean. The boosters and the orbiter all required extensive refurbishment of at least two to three months before the next flight and a standing army of several thousand people was required to do all of this. So rather than lowering launch costs as originally intended, the Shuttle actually cost more than expendables to put a payload into orbit!

As Musk often points out, to lower the cost of space access it is not enough for a rocket vehicle to be reusable, it must be quickly reusable. That is, it must be prepared quickly for the next flight by a modest-sized operations crew. The first generation RLVs will probably be capable of turnaround times measured in weeks. Eventually, though, RLVs, like those of XCOR, Virgin Galactic, Stratolaunch and Masten, will be turned around within days, or even on the same day, for a return to space. This is crucial because the mass of the hardware and fuel used for the return of the vehicle to Earth subtract from the mass available for the payload. To make up for lower payload mass, a reusable vehicle needs to fly often. (Please see “LargeCap Review” in the March 2012 issue of Thruster.)

To fly often, a RLV will have to achieve a level of robustness and reliability not previously seen in rocket vehicles. Consider again that Millennium Falcon. It must take off, and fly like an aircraft from subsonic to supersonic (Mach 1+) to hypersonic speeds (Mach 5+) and deal with the transition from a dense atmosphere to near vacuum. Once in orbit it must act as a spacecraft with control thrusters, de-orbit propulsion, etc. During the return to Earth it must deal with the extreme heat of reentry and the reverse transition from vacuum to dense atmosphere and aircraft operations before finally landing. For space to become truly affordable, a RLV must be able to do all of that hundreds of times between major overhauls and thousands of times during its operational lifetime. That is, it must become the spaceliner equivalent to an airliner. History has proven this extraordinarily difficult; however, physics proves this is possible.

The first generation of RLVs of NSG 100 SmallCap companies (e.g. XCOR’s Lynx, MSS’s Xaero/Xombie, and LargeCaps like VG’s SpaceShipTwo and Stratolaunch’s M351 system, of course, won’t achieve the ultimate in performance. While many of these players focus on suborbital activity, the more interesting long-term destination is orbital. The first orbital RLVs of NSG 100 LargeCaps will consist of at least two stages rather than our ideal Millennium Falcon single stage. However, it is important to get the evolutionary process underway. Most successful technologies start with many different competing and imperfect designs, each with advantages and disadvantages, and gradually evolve towards designs with optimum performance and features and (usually) with lower prices. For example, the Douglas DC-3, the first truly practical airliner, which debuted in 1936, was built on the lessons learned from a number of earlier airliners, such as the Ford Trimotor and the Boeing 247. The de Havilland Comet, the first jet-powered airliner, had serious structural flaws that led to several disastrous crashes. This did not end the development of jetliners, instead the industry learned from those problems and became a success. 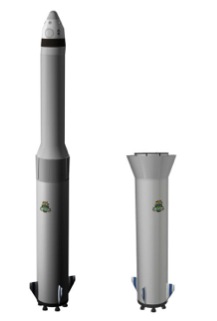 Neither NASA’s nor the Defense Department’s management ever had the patience or insight to maintain and nurture long term, incremental development of RLVs. (For instance, the McDonnell Douglas DC-X project, led by former Apollo astronaut Pete Conrad, was originally intended to be the first step in such a program. However, the effort went off the rails with NASA’s X-33, which became a component technology project rather than a flight test vehicle project.) NASA stuck with the Shuttle for various cultural and institutional reasons and the military decided ELVs were good enough for its needs. The mainstream commercial space industry generally left leadership in launch vehicle development to the government; capital costs were seen as too high and markets too small and uncertain.

The NewSpace industry, however, has changed all this. NSG 100 LargeCaps like SpaceX, Blue Origin, and Virgin Galactic are highly motivated by the potential markets indicated in the “NSG 8-Verticals.” Further, they have substantial capital (in the billions, when combined) to pursue serious RLV development. Plus, they will have income from ongoing operations, such as satellite launch and tourist flights (of the 1st and 3rd NSG 8-Verticals, respectively.)

The diversity of competing RLV designs and approaches is an especially good sign of the strength of the industry. SpaceX is starting from an orbital ELV design and attempting to convert it to a RLV. (Please see “LargeCap Review” in the April 2012 issue of Thruster.) Blue Origin, like Virgin Galactic and the SmallCap companies Masten Space Systems and XCOR, is starting in suborbital space where they expect to work out all the bugs in operating a rocket vehicle like an airliner, before going to orbit. We see vertical launch and landing, vertical launch and horizontal landing, and air launch. Although not a LargeCap, Reaction Engines in England is also attempting a rocket-airbreather combo to get to orbit in a single stage design. (Please see “Point-to-Point” in the Premiere issue of Thruster.)

Eventually real spaceships will emerge from an evolutionary battle among these companies for the fittest RLV design. The Space Age of the 1960s accomplished great things but unfortunately it also made space travel synonymous with high costs. The Apollo program was canceled after just six missions reached the lunar surface, because it was too expensive to continue. Space-based solar energy, global satellite broadband services, and the many other space applications listed in the “NSG 8-Verticals” have been waiting for years for low cost access to orbit. At last we are finally entering an age where private companies have the determination and the capital to create spaceships that will allow such users to escape from this deep gravity well, and get on with the task of developing the endless high frontier. Don’t worry, Mr. Solo, we’re well on our way…

Clark S. Lindsey is the Managing Editor of NewSpace Watch, the publisher and editor of the educational website HobbySpace.com, and a first-time contributor to Thruster.

The whole isn’t greater than the sum of its parts; that’s a flaw in our thinking. Non-reductionism requires magic, not merely science.
Up Next
Strange Maps

The Garden of Eden – in China?

Could the unforgiving Taklamakan Desert once have been the location of the Garden of Earthly Delights?