This story sounds creepy, like one of Dr. Frankenstein’s early experiments. But it’s actually a touchstone, opening up a whole new area of medicine. Scientists took blind tadpoles and made them see again, out of an eye implanted onto their tails. This was all made possible with the use of a special drug, one already approved by the FDA.

So how did they get to this point, and how does it all work? Previous research had shown that it was possible to do eye transplants on tadpoles who were blind. This study, published in npj Regenerative Medicine, used African clawed frog tadpoles. These were chosen for their impressive, regenerative abilities.

Two scientists at Tuft’s University in Massachusetts conducted the study. They were postdoctoral fellow Douglas Blackiston, and the director of the Alan Discovery Center, Michael Levin. These biologists are interested in the process of innervation, or spontaneously growing nerves from transplanted organs.

The reason we can transplant whole organs but not eyes or eardrums, is because medical science hasn’t figured out now to connect them up to the nervous system, yet. Does every neuron have to be connected up individually, or is there a better way to do it? The former seems impossible, or at best painstaking.

A better method is a process known as neurogenesis, where a network of nerves sprout and hook themselves up to the nervous system, without human intervention. This would revolutionize regenerative medicine. Insert viable eyes into a blind person, trigger the process, and let biology do the rest.

In previous studies with tadpoles, researchers showed that light could be registered in transplanted eyes. In another, they rewired a tactile or touch-sensing channel, to sight.  Here, they used a small amount of the migraine medication zolmitriptan, to engage innervation, resulting in the eye’s integration into the nervous system. The conclusions garnered from this study act as a “road map” to other biologists, on how to activate neurogenesis. 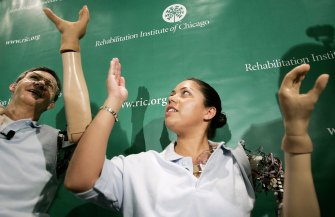 To conduct the experiment, Blackiston removed the eyes of embryonic tadpoles with tweezers. ”They are Play-Doh consistency,” at that stage, he told Scientific American. He then took a scalpel and placed the eyes in the trunks of their tails, one eye per tadpole. They healed up quickly and were allowed to mature for a time. Then, one group was given Zolmitriptan, which activated certain serotonin receptors, namely 1B and 1D (5-HT1B/D). These receptors have in the past, been identified as neural stimulators.

The other group received a saline solution. 40% of those who got the drug showed a network of nerves connecting their eye to their nervous system under a microscope. The wiring did not interfere with any other nerves or biological processes.

Now it was time to test the tadpoles. Subjects were placed in a black box filled with water and chambers they could swim through. Lighting was placed above and cameras below, which tracked their movements. When a red light flashed, the tadpoles in that chamber would receive an electric shock. In chambers with blue light, no electric shocks occurred.

The scientists wanted to see if the tadpoles would move from a red chamber to a blue one, to avoid a shock. To do that, they’d have to recognize color. 11% of those who underwent eye grafts alone moved to a blue chamber. 29% of those who received grafts and the innervation drug moseyed on over. They could recognize color, even though their eyes were not hooked up to their brain. Or, at least not directly.

In the second leg of the study, researchers wanted to find out if the tadpoles could see images. They were made to follow an optical pattern, rotating clusters of triangles, traveling either clockwise or counterclockwise, on an LCD screen placed above their tank. 80% of regular tadpoles followed it, as did 38% of blind tadpoles, and 32% of those who underwent an eye graft alone. But what really stood out is, 57% of subjects who underwent innervation followed the pattern. 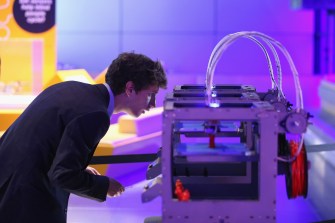 Someday we’ll be able to 3D print any body part and attach it properly. Getty Images.

These results don’t just affect tadpoles. “If a human had an eye implanted on their back connected to their spinal cord, would the human be able to see out of that eye? My guess is probably yes,” Levin told the New Scientist.

This is a starting point, a proof-of-concept study. It’ll take a long time to understand innervation and neurogenesis, particularly all the genetic, biochemical, and biological aspects at play. What’s been discovered is an entirely new avenue, which could totally revolutionize organ transplant, grafts, prostheses, and implants.

“For regenerative medicine to move forward and enable the repair of damaged tissues and organ systems, we need to understand how to promote innervation and integration of transplanted organs,” Dr. Levin said. “This research helps illuminate one way to promote innervation and establish neural connections between a host central nervous system and an implant, using a human-approved small molecule drug.” This discovery will allow for surgeons to someday transplant bioengineered organs as well.

Blackiston said, “The fact that the grafted eyes in our model system could transmit visual information, even when direct connections to the brain were absent, suggests the central nervous system contains a remarkable ability to adapt to changes both in function and connectivity.”

To learn more about this groundbreaking study, click here:

The strange under-ice lakes of Antarctica

OmnesViae is a modern route planner based on the roads of the Roman Empire.
Up Next
Surprising Science

How many calories are in human anyway?