Kale is already a thing. It’s a highly regarded health food these days, billed as an edible warrior against cancer, depression, and a boon to mental clarity. It’s gotten so much positive press that it’s become a polarizing topic: People either love kale — like me — or hate it.

Now researchers from the University of Illinois have released a study of the cognitive effects of lutein — a nutrient in kale and spinach, as well as in avocados and eggs, that the human body doesn’t produce — in 60 subjects aged 25 to 45. They found that those with higher levels of lutein in their systems exhibited neural responses more like those of younger adults than their peers.

The study’s authors wanted to try and catch what’s going on before, or at least just as, age begins to take a toll mentally. According to post-doc Anne Walk, first author of the paper, “As people get older, they experience typical decline. However, research has shown that this process can start earlier than expected. You can even start to see some differences in the 30s.”

Lutein is stored in the human body in brain tissue and also in the eyes, which allowed researchers to assess each subject’s lutein levels non-invasively by measuring their macular pigment optical density. They employed a customized heterochromatic flicker photometry (cHFP) technique and a macular densitometer. In cHFP, subjects adjust the radiance of one light against another until the one light no longer flickers.

Next, subjects performed a two-stimulus oddball task to test their attentiveness while their neural activity was measured using scalp electrodes. Subsequent tests are planned that’ll examine the relationship, if any, between lutein, learning, and memory.

The results were intriguing. “The neuro-electrical signature of older participants with higher levels of lutein looked much more like their younger counterparts than their peers with less lutein,” Walk tells Illinois News Bureau. “Lutein appears to have some protective role, since the data suggest that those with more lutein were able to engage more cognitive resources to complete the task.”

Walk explains that, “We want to understand how diet impacts cognition throughout the lifespan. If lutein can protect against decline, we should encourage people to consume lutein-rich foods at a point in their lives when it has maximum benefit.” 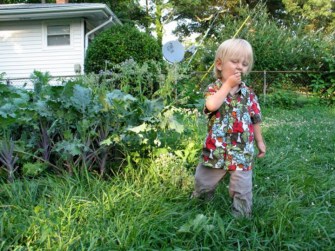 Which is not to say that people should only eat kale because they have to.

Related
Hard Science
Some earthquakes last for seconds, others for minutes — and a few for decades
What do you call it when the Earth shakes for three decades?
Sponsored
What childhood “money story” is shaping your financial behaviors?
Here are the signs that you inherited “money anxiety” from your parents.
The Present
The “maritime Indiana Jones” who salvages shipwrecks now wants to tow icebergs
Simple physics makes hauling vast ice chunks thousands of miles fiendishly difficult — but not impossible.
Neuropsych
Inside the brains of aging dogs
In a citizen science project, thousands of pet dogs are helping scientists to understand what happens to memory and cognition in old age.
Neuropsych
The most common source of awe might surprise you
It’s us.
Up Next
The Present
Digital Natives Do Not Exist, Claims New Paper
A paper argues that the younger generation is no better at technology and multitasking than older people.