A week never passes without diet advice arriving from this celebrity or that wellness blog. Given the number of studies being done on a variety of nutritional options, figuring out what foods to eat and how much of it to consume is daunting. Sorting through suspect data promoted by companies with an interest in marketing particular foods confuses us further. New research by the European Society of Cardiology makes one thing clear, though: crash diets are a terrible idea, at least if you have heart problems.

We already knew severe calorie restriction is a bad idea that leads to a variety of eating disorders. Anorexia and orthorexia, the latter an obsessive focus on “pure” foods that becomes more restrictive over time, are psychological problems that quickly lead to bodily deterioration. There’s also pregorexia, a severe calorie restriction diet women use to attain pre-pregnancy weight, and drunkorexia, in which food calories are restricted so that alcohol makes up the bulk of caloric intake that the drinker then attempts to burn off with exercise. 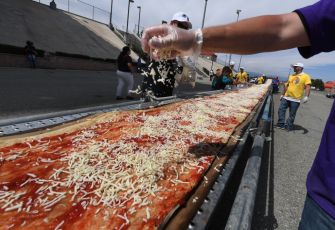 Portion control fail: volunteers spread tomato sauce and cheese onto a pizza base as they successfully break the Guinness World Records title for longest pizza, with a length of 1.32 miles (2.13km) at the Auto Club Speedway track, in Fontana, California on June 10, 2017 (Photo: Mark Ralston/AFP/Getty Images)

This is not to say that calorie restriction isn’t a viable way to lose weight. In fact, some argue that calories are the only viable way to lose and maintain weight, though more recent research shows the type of calorie does matter. A major issue when it comes to calories might just be the rapidity with which one attempts to restrict their intake. Any program promising quick weight loss should be considered suspect.

Regardless of which type of calorie restriction diet is being followed, this new research focuses on one specific organ. Twenty-one obese volunteers, with an average age of 52, consumed 600-800 calories per day for eight weeks, which is generally one-third of normal intake for the average human. Since they were obese, this is likely an even greater swing in terms of total caloric intake. MRIs were given at the beginning and end of the trial.

A week into the study the participants’ fat levels dropped significantly, including a 42 percent decrease in liver fat and 11 percent decrease in visceral fat. Insulin resistance, blood pressure, and fasting total cholesterol levels all improved considerably. These are all good signs.

But heart fat content rose by 44 percent. The participants experienced significant deterioration in their hearts’ ability to pump blood. Over time this condition bettered so that by the end of the trial levels were improved. According to lead author Dr. Jennifer Rayner, a University of Oxford clinical research fellow, this is counterintuitive.

“The sudden drop in calories causes fat to be released from different parts of the body into the blood and be taken up by the heart muscle. The heart muscle prefers to choose between fat or sugar as fuel and being swamped by fat worsens its function. After the acute period in which the body is adjusting to dramatic calorie restriction, the fat content and function of the heart improved.”

Rayner is not against calorie restriction diets overall, though she does advise that people with heart problems seek out proper medical advice before attempting such a diet. This initial decline in heart function could have serious adverse effects, including death if not monitored.

One of the biggest problems with any sort of diet is the sudden reversal of eating habits. If you’re eating 3,000 calories a day, suddenly dropping to 600 calories is never a good idea. A more measured approach would be to drop to 2,500 calories for a spell, then 2,000, and so on. This would give your body time to adapt without putting undue stress on your heart.

Unfortunately, we’re animals of extremes. Once inspired to undergo a new routine we often jump right into it without consideration of the consequences. This is especially dangerous when it comes to our biology. Giving your body time to adapt to new circumstances is a healthy approach to weight loss. Anything extreme never ends well.

Related
Strange Maps
The horrors of World War II air war, in one stark map
This graph shows how badly German cities were hit by Allied bombing raids.
Hard Science
Subatomic ghosts shed new light on the structure of protons
A Fermilab study confirms decades-old measurements regarding the size and structure of protons.
The Present
The Taoist philosophy behind Alibaba, China’s e-commerce giant
Alibaba has played a key role in China’s meteoric economic rise.
The Well
Can we condition ourselves to be heroes?
Neuroscientist Robert Sapolsky on the science of temptation, and the limitations of your brain’s frontal cortex.
▸
6 min
—
with
Robert M Sapolsky
Thinking
3 brain games to practice deductive, inductive, and abductive reasoning
Take a closer look at the different types of reasoning you use every day.
Up Next
The Present
Why Elon Musk hopes the Falcon Heavy launch will spark ‘new space race’
SpaceX CEO Elon Musk is encouraging aerospace companies to up their game after successfully launching the most powerful rocket since NASA’s Saturn V.