Climate Feedback has been busy correcting reporting on inaccuracies within the mainstream media. Now the site is looking to expand its efforts as a watchdog for scientific reporting by asking for funding through IndieGoGo.

Climate change shouldn’t be a divisive issue. There’s an overwhelming amount of evidence showing our climate is warming due to human activity. Yet, one in two Americans don’t believe climate change is caused by human activity. Part of this is due to misinformation spread through the mainstream media.

Climate Feedbackhighlighted a piece published just this month in the Wall Street Journalclaiming an impact report released by the United States government overstated the damage done by climate change. The article was written by Bjorn Lomborg, a well-known climate denier.

Climate Feedback weighed-in on Lomborg’s op-ed piece, giving it a low grade. “Ten scientists analyzed the article and found that Lomborg had reached his conclusions through cherry-picking from a small subset of the evidence, misrepresenting the results of existing studies, and relying on flawed reasoning,” the summary reads. 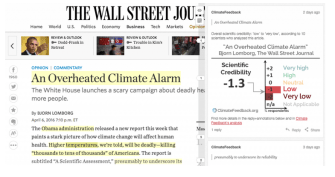 Another piece of climate denial Climate Feedback criticized, appeared in Forbes on January 14, 2016, where the author claimed “2015 was not even close to the hottest year on record.” The author James Taylor seems credible at first glance, his bio says he “studied atmospheric science and majored in government at Dartmouth College.” It also says he works for the Heartland Institute, a public policy think tank and one of the leading forces in climate denial.

Climate Feedback and its army of accredited scientists once again weighed-in, annotating the piece and finding it lacked credibility. They summarized that the op-ed was an “inaccurate and misleading report. It only comments on the temperature in the troposphere (not at the surface of the Earth, where people live) and ignores most of the data available to discuss whether or not Earth’s climate is warming.” 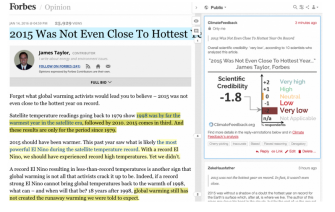 Climate Feedback’s website shows us trends in the media community. Websites which were once in high-standing in my own mind quickly fell from the pedestal.Forbes,Wall Street Journal, and The Telegraph being the worst offenders featured have an undeniable track record of publishing op-eds about climate denial. Climate Feedback’s work has already helped boost media standards.The Telegraph issued a public correction following Climate Feedback’s analysis of Dan Hyde’s articleEarth heading for ‘mini ice age’ within 15 years.

But consider the harm done in the interim. Going back to the article by Taylor posted on Forbes, just a few days later another article by a different author reported that 2015 was the hottest year on record. This scientifically accurate article received 2,572 views, whereas Taylor‘s inaccurate climate piece received 45,478 views.

Climate Feedback also works to promote and praise good science journalism. Chris Mooney’s article What we’re doing to the Earth has no parallel in 66 million years, scientists sayreceived high marks, as did Andrew Freedman’s article How Hurricane Patricia became the strongest hurricane on record so quickly.

The team uses the Hypothes.is annotation platform to highlight, comment, and discuss the accuracy of the piece. It allows scientists to directly address comments made by the author in the article and provide counterpoints in the form of research.

Though this open plugin and its community of over 100 scientists, Climate Feedback has drawn our attention to inaccurate reporting. This site is a tool the public can use to demand more accurate science reporting from journalists and bloggers.

Climate Feedback’s founder Emmanuel Vincent says he wants to increase the frequency of the articles they analyze to effect change at a broader level. But in order to do this the site needs help to expand.

The site is looking for funding on IndieGoGo to help them build the Scientific Trust Tracker.It’s a reference tool, which would allow people to easily “compare and contrast the credibility of a variety of websites and news organizations,” based on how they’ve reported on climate issues in the past.

As you can see from the mockup, sites like The New York Times and Mashable tend to feature accurate reports on climate change, whereas Forbes and The Wall Street Journal are less trustworthy when it comes to climate news. 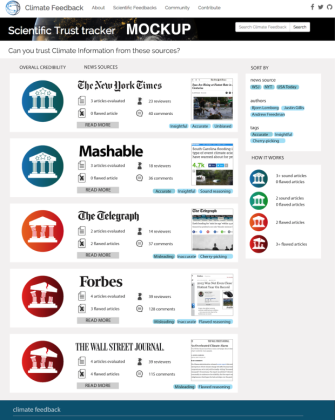 Journalists are what help a democracy function. It’s our job to observe and report to the best of our ability, so the people can make well-informed decisions on policy. It’s a shame sites, like Forbes, The Wall Street Journal, and The Telegraph would ever give a megaphone to climate deniers. Climate Feedback may help set sites that would do such a thing down the right path.

Video cameras on city streets are only the most visible way your movements can be tracked.
Up Next
Surprising Science

Faith Healing Needs to be Punishable by Law

Mariah Walton faces a double lung and heart transplant because her parents chose faith healing over medical treatment when she was born.