When thinking about the story of mankind what comes to mind? Politics? Monkeys? Maybe the use of tools and language; culture, economics, technology… how about fire? Depending on your disposition this notion could pull you in several different directions. It’s a matter of perspective; and though we’re all biochemically speaking 99.9% similar to any other human, we individually experience the story of life on earth in profoundly unique ways. This rich diversity may be the spice of life but can also separate us from the larger framework of our shared story. Enter The Big History Project: a stand-alone MOOC exploring the origins of the universe, our planet, life and humanity.

From the Big Bang to pocket-sized supercomputers, this interdisciplinary tour de force takes us through 13.7 billion years of cosmic evolution to get to where we stand today. Bill Gates calls it his “favorite course of all time” and helped seed the project to its fruition. Being offered to educators through a classroom model and online, device agnostic, to anyone, for free; with slick videos, infographics and optional quizzes, in 6-8 hours you can now become a certified Big Historian. And for the academically less inclined, History Channel has a series of episodes covering the material narrated by former High School Chemistry teacher Walter White – er Bryan Cranston – available both online and the boob tube as well. 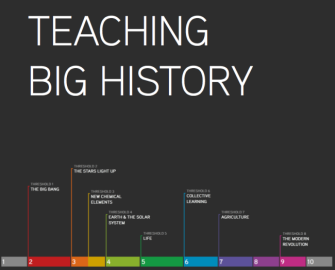 Broken down through 8 Threshold moments, ‘the story of us’ becomes one of sheer improbability. For instance, even beyond the entropic chaos of the early universe and it’s just-right degree of gravity, the earth’s elements possessing the complex compounds of anciently exploded stars and it’s Goldilocks location to the Sun, if a Mars-sized asteroid collision hadn’t hit the early Earth and provided us our Moon, the planet would not have had the balanced orbit required for stable weather patterns and thus, for complex life to endure and mature. This just being one of several examples (the asteroid that wiped out the dinosaurs was apparently around 5 minutes from missing earth altogether!) of the remarkable rise of mankind into modernity.

While a History course, for and of the ages, this “class” is ultimately the Cosmology of modern day Science. It encompasses the entirety of academia in one sweeping story of physics, astronomy, geology, biology, ecology, sociology, technology and beyond. It doesn’t overstep its boundaries into the nuances lacking consensus, rather, it simply and effectively congeals the string of scientific evidence that took us from nothing to something; energy to matter; atoms to organisms; ecosystems to civilizations; and concludes with some open-ended hypothesis for how the next chapter may unfold.

Of critical importance as we move forward into the future is holding this appreciation for the past. As such, Big History becomes a great addition to the cognitive toolkit, both individually and collectively. By exploring the relativistic relationship of human time within cosmic time, it helps override anthropomorphic tendencies and orients us into the grander scheme of things. As a fact-based perspective that transcends the arbitrary separations of our day, Big History showcases the fundamental unity of mankind and our interdependence with the planet. Speaking through the universal medium of science, it becomes a story for everyone. The hope is, more people start to tune in.

Related
Starts With A Bang
The path forward for astronomers and native Hawaiians
A history of injustice and the greatest natural location for ground-based telescopes have long been at odds. Here’s how the healing begins.
Thinking
“Give a f***, actually”: The surprising benefits of being grateful for things you dislike
Radical Emotional Acceptance calls on you to celebrate all of life’s emotions — even the negative ones.
Thinking
Visual thinking: How to understand the inner lives of animals
Humans are good visual thinkers, too, but we tend to privilege verbal thinking.
Strange Maps
The world’s longest straight line connects Portugal to China
It’s nearly 20,000 miles long.
The Well
This is what the fourth dimension looks like
Left–Right, Back–Forth, Up–Down. What’s the fourth dimension?
▸
3 min
—
with
Brian Greene
Up Next
Zen and Instagram Yogis
Shunryu Suzuki’s role in spreading Zen Buddhism in America cannot be understated. While he never accomplished the widespread recognition that another Suzuki, Daisetz, achieved a half-century before Shunryu’s arrival in […]