An astronaut looked out the window of the Cupola—an observation nook on the International Space Station (ISS)—and saw a crack in the glass. Imagine floating in space in a pressurized spacecraft and seeing a crack in the thing keeping you safe from the empty void outside.

ESA astronaut Tim Peake snapped the photo of the 7mm-diameter crack in the fused-silica and borosilicate-glass window aboard the ISS. The cause of the crack was from a small piece of space debris, according to a post, “possibly a paint flake or small metal fragment no bigger than a few thousandths of a millimeter across.”

“I am often asked if the International Space Station is hit by space debris. Yes – this is the chip in one of our Cupola windows, glad it is quadruple glazed!” said Peake.

It’s important to keep in mind the speeds at which these objects are traveling. The ISS is zooming around the Earth at over 17,000mph, which is why a paint flake can crack a window. Something larger, like 1cm in size, could potentially disable one the ISS’s instruments, hitting it with the force of an exploding grenade. Any object above 10cm, then you’ve got problems, like penetrating the space station, Gravity-level kinds of problems.

This image sheds light on a huge problem in space, which is space junk. NASA even has a whole office dedicated to monitoring debris in space.

Below is a plot of the images in Earth’s orbit. Around 95 percent of these objects are space debris. 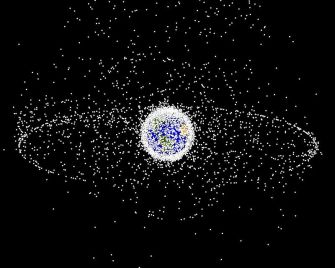 NASA and other space agencies work to monitor the junk and warn the ISS to maneuver to avoid any oncoming debris. However, there have been at least three occasions were debris-proximity warnings came too late for the ISS to move. The station’s crew was forced to hunker-down in the Soyuz spacecraft in case of an emergency bailout.

There are 500,000 objects orbiting Earth the size of a marble or larger, but there are even more–many millions more–pieces of debris that are smaller and untrackable. Given the number of debris, there have been only a few major accidents. Mostly space shuttle windows needing replacement because of flying paint flecks.

These hard-to-finish books are still worth the effort.
Up Next
Think Again Podcasts

Subscribe on Google Play, Stitcher, or iTunesCome talk to us on Twitter: @bigthinkagainIn this episode: Why do so many of us choose to remain in a state of “sedentary agitation” about America’s problems when […]