Archeologists have a new mystery to solve in Kazakhstan, a complex of stone structures reminiscent of Stonehenge but much bigger. The site is the size of 200 American football fields, about 300 acres. It was discovered in 2010 by a man identified as F. Akhmadulin, who was exploring the sagebrush desert area in Altÿnkazgan on the Mangÿshlak Peninsula along the eastern shore of the Caspian Sea with a metal detector. 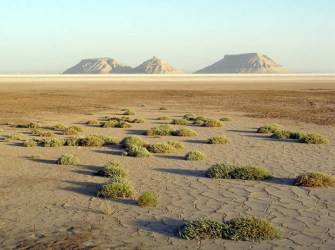 Akhmadulin came across a piece of an ancient silver saddle and some other bits inside some stones. He brought his find to archaeologist Andrey Astafiev, of the Mangistaus State Historical and Cultural Reserve. 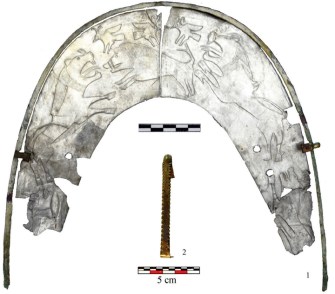 When Astafiev and Evgeniï Bogdanov, of the Russian Academy of Sciences Siberian Department’s Institute of Archaeology and Ethnography, visited the area to which Akhmadulin had pointed them, it was easy to see that there was something here worthy of investigation. 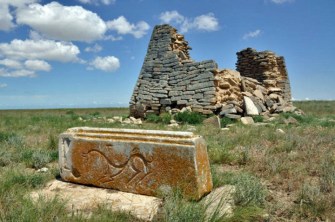 Excavation would have to wait, however, according to the scientists’ published research: “Unfortunately, the socioeconomic situation in the region is not one in which it is easy to engage in archaeological research, and it was not until 2014 that the authors of this article were able to excavate certain features within the site.”

When they were finally able to explore the site, they uncovered a complex of structures of “stone slabs inserted vertically in the ground” extending well beyond what they expected. Some of the stones are as large as 34 by 24 meters, and others are as small as just 4 meters. Many sport carvings, and some don’t.

So the fundamental mystery is just whose site is this? So far, the saddle seems to be the strongest evidence. 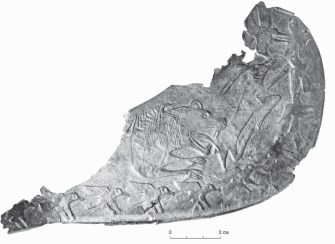 An analysis of its saddle’s carvings suggests it dates from about 1,500 years ago, when the Roman Empire was collapsing and the Huns were marauding across Asia and Europe. Astafiev and Bogdanov think it’s likely the saddle belonged to a Hun, and someone of importance since there are high-status indicators called “tamgas” engraved on the saddle’s surface. They believe the saddle artwork is hand-carvings in leather that were impressed into silver plates laid over them. The scientists also wonder if the saddle was left in a stone structure as part of a ritual or funeral. (One skeleton has been found under the stones.)

Other possibilities are that the saddle was left at the site at a later time, or that the site was built by one of the local populations that fled in the face of the Huns.

The purpose of the entire sprawling complex remains a mystery for now. Bogdanov told Live Science that, “I hope that one day there [will be] a film about the archaeological excavations on the Mangÿshlak, about ancient civilizations and modern inhabitants.”

Related
The Learning Curve
5 Stoic quotes to help you through difficult times
“We suffer more often in the imagination than in reality.”
Starts With A Bang
The good reasons scientists are so hostile to new ideas
Many people out there, including scientists, claim to have discovered a series of game-changing revolutions. Here’s why we don’t buy it.
The Present
Climate change is altering the chemistry of wine
Smoke taint from wildfires is gross, even to wine amateurs.
13.8
Could a hidden variable explain the weirdness of quantum physics?
We have searched and searched but have never found one.
The Past
The Wild West was lawless and chaotic — and the police helped keep it that way
Lawmen and outlaws were often the same people.
Up Next
Culture & Religion
Family Planning Is a Human Right
Women have the right to decide when to get pregnant. To exercise that right, they need access to contraception and information about family planning.