Few things strike as unnatural and disturbing as the eating of human flesh. What most people don’t know is, cannibalism was extremely common in all that cultures that abhor it today. The taboo must’ve started somewhere. Several Stone Age archaeological sites in Western Europe have uncovered evidence of cannibalism, such as El Sidrón cave in Spain and Gough’s Cave in England. What isn’t clear is why the former inhabitants engaged in the grizzly practice. Were they faced with starvation, like the Donner party, or the 1972 Uruguayan rugby team (inspiration for the movie Alive)?

Archaeologists consider Paleolithic cannibalism either ritualistic (religious) or nutritional in nature. A new study however, questions “nutritional” cannibalism, as the sole motivation behind most historical cases. Published in the journal Scientific Reports, archaeologist James Cole, from the University of Brighton, in England, posits that there is very little evidence that early hominids ate human flesh in order to survive, during the Paleolithic period.

This is the Old Stone Age, between 2.5 million to 10,000 years ago. The time period is typified by simple stone tools, cave paintings, and ivory carvings of objects, such as flutes. The Venus of Dolní Věstonice is perhaps its most famous artifact. This is a carving of a female figurine, discovered in the mountains of the Czech Republic, dating back 29,000–25,000 BCE. 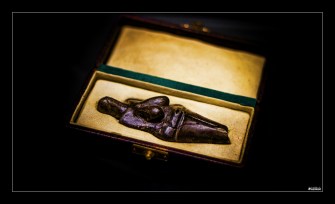 The Venus of Dolní Věstonice in an exhibit in Helsinki. By: Daderot (Daderot) [CC0 or CC0], via Wikimedia Commons.

To try to gain some insight into nutritional cannibalism, Cole calculated how many calories eating an entire human body might offer. Though such calculations can vary widely, he discovered it would probably contain more than 125,000 calories, in all. He compared this to the species of fauna available for hunting at the time.

Of course, you wouldn’t eat a whole human body. The thighs, with the most meat, offer about 13,350 calories in all, the upper arms 7,450, the calves 4,490, and the forearms 1,660. That’s not to mention the organs. Though these numbers sound impressive, this offering would only be able to feed about 25 adult males for half a day. The same number of men in a hunting party could take down a steppe bison, which would offer 612,000 calories, enough food to last them a week and a half.

A wooly mammoth, widely hunted at this time, would provide 3.6 million calories, enough food for two months, acquired in such a way that left nobody asking whether anyone’s seen Rick. The human offering in the calorie department is paltry, compared to other animals which were readily available during the Paleolithic, according to Cole. These findings suggest that ancient hominids may have taken part for “…more socially or culturally driven narratives.” 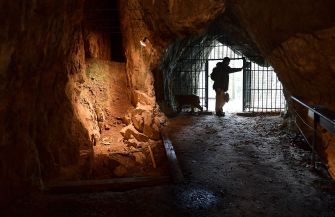 Though an interesting approach for sure, critics argue that Dr. Cole’s methodology leaves something to be desired. For instance, he based his calculations on four adult males. There weren’t any calculations for women or children and how many calories they might offer. He included studies from several decades ago. As a result, some argue that his calorie calculations may not be accurate.

Susan Roberts is a nutritional scientist with the USDA Human Nutrition Research Center. She told TheNew York Times, “The energy contents of lean tissue, fat and body carbohydrate are well established, and using four cadavers to get to estimates of quantities is a terrible way to go about calculating the human body.” Others argue the opposite: that this is the same approach used to calculate the caloric value of the livestock we consume today.

Another shortcoming may be Cole’s caloric requirements. Modern humans are thought to eat far less calories than say, Neanderthals or even prehistoric Homo sapiens. British anthropologist Silvia Bello agrees with Cole, that consuming human flesh was probably more of a choice, than a way to stay alive. But how can we as modern humans determine their motivations? Oddness aside, Cole may not have put us directly in the minds of ancient hominids, but he does offer a stepping stone, and a way of discovering more of our ancient past, and what it may say about our species, today.

For further insight into our more unseemly acts and where they originate, click here:

Advances in ancient DNA analysis gave researchers a new way to trace the movements of peoples across Eurasia.
The Past

10 of the most legendary rulers from ancient history

From Ramses II to Alexander the Great, these leaders helped shaped the world we know today.
The Past

British archaeologists find, then rebury, a Roman villa in Scarborough

The “first-of-its-kind” archeological find is being reburied despite the fact that researchers haven’t finished studying it.
The Past

Civilization was built on ceremony.
Up Next
The Present

What do both liberals and conservatives love? Dinosaurs.

Research shows the groups have different tastes when buying science books. For the most part.